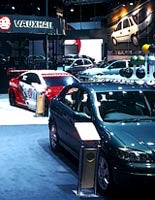 The production of any event involves months of pre-planning and detailed organisation. This diary account of the journey from winning a piece of business to unveiling the final exhibition reveals the layers of detail that go into producing a successful exhibition.

It was back in August last year that The Early Action Group won a seven-figure contract to provide a “turnkey management package” that included the manufacture, installation and storage of Vauxhall Motor’s UK exhibition and display requirements over the next five years.

By October 18 40ft trailers had left The Early Action Group’s premises in Manchester, headed for the National Exhibition Centre in Birmingham, to build the 3,300sq m Vauxhall stand at the International Motor Show.

The planning for this event, however, had begun almost a year earlier with smaller exhibitions being used to test a “stand prototype”.

Marshall Design had already produced a concept to meet the brief for the new Vauxhall corporate look. The intention was to create an exhibition environment with theatrical effects, movement and excitement.

In addition, there was a need to develop a high quality, reusable structure that would satisfy Vauxhall’s exhibition requirements in various venues throughout the UK. This extended from 160sq m at the Ideal Home Exhibition in Earl’s Court to 3,300sq m at the NEC in Birmingham.

A pre-prototype meeting is held between Early Action, Marshall Design and the exhibition management team at Vauxhall Motors.

It becomes clear that a “one-hub bay prototype” is required to be six metres in height, including signage, lighting and floor plans, with four alternative finishes. The distinctive elements of the hub, which is a semi-circular, fully-glazed structure, are to be incorporated in the exhibition programme to reinforce a consistent image and perception of Vauxhall.

The hub has the Vauxhall title, comprising the logo and lettering against a horizontal ribbon, running around it; and features a “bries soleil” which is a curved, louvered, projecting soffit (the underside of a part of a building, such as an arch, beam or stair) attached to the top edge of the hub, which in dealership premises helps regulate temperature within the building.

This is to become the focal point of the new concept for Vauxhall’s 2000 exhibition programme.

Marshall Design had, at the concept stage, taken into account considerations such as height restrictions and floor loading in different exhibition venues; and it was Early Action’s responsibility to resolve issues such as ease of handling, installation and reliability. These requirements included every element having its own storage and packing cases.

Various discussions are held as to the thickness of metalwork posts, the width and colour of the glass. Glass fixing sample brackets are produced, based on the Marshall Design details.

Working very closely with the designers, we also have to look at the need for the basic structure to cope with uneven venue floors, and the fact that it would also be used to suspend overhead lighting in venues where lighting rigs are not permitted. The latter means that we have to achieve effective cable management by preparing them with simple connectors that can be pre-installed within the structure, and develop suspension brackets for light fittings which integrate with, and are complementary to, the structure of the hub.

The prototype has been built, and a meeting is held to view it and discuss developments. This is of particular importance as we have just eight weeks until the Ulster Motor Show.

The Christmas shutdown is looming, so all orders have to be placed with suppliers before the holidays. Early Action and its suppliers work through the Christmas period, with contact on a daily basis, supported by weekly meetings.

Internally, we hold daily production meetings attended by all heads of department and our workshop.

We produce all the technical engineering drawings using AutoCAD and these are passed between us, Marshall Design, Vauxhall and the exhibition organisers via e-mail and ISDN lines.

Structural calculations for both a four-metre and six-metre-high fully-glazed structure are obtained from engineering group Hancock Wheeldon and Ascough, to ensure structural stability and to verify the weight of the elements proposed.

The day before the Ulster Motor Show, and we meet with Marshall Design and Vauxhall to view and discuss samples, including brackets, an inner and outer curved bries soleil, curved glass panels and fixing, glass panels and various types of finishes.

We hold a debriefing meeting on the Ulster Motor Show and are asked to make several changes for the forthcoming Boat &amp; Caravan Show. These include simplifying the construction, calculating the costs for some changes to the bries soleil, providing grey/green overlays to the columns, looking at other flooring options, and changing the trim on the downlighters from white to stainless steel.

By mid-March the colour of the posts is also changed, for use at the Ideal Home Show.

We produce drawings showing alterations at each stage, and these correspond to the structural calculations and drawings.

On May 9, we receive drawings on which to quote for the International Motor Show at the NEC, which will comprise several hubs and circles of varying sizes. It also includes a special feature highlighting, in an interactive environment, Vauxhall’s innovative, technical developments.

We enter our tender – along with five other companies from across Europe also pitching for the contract – in good time for the closing date of May 26.

In the meantime, however, it’s business as usual – with the prototype being built at Interbuild, the International Building and Construction Exhibition, held in Birmingham from May 21-25.

We receive confirmation that we have won the contract to provide Vauxhall with a turnkey exhibition management package. This means that Early Action will be handling all manufacture, building, installation and storage for the company’s UK exhibition and display requirements over the next five years, involving us in up to 150 events up until 2005.

We have nine weeks to work on the first event, the 3,300sq m stand at the International Motor Show at the NEC in Birmingham.

We keep in place the same hub team of a foreman and three workmen, each designated to handle a specific element – fascias, steelwork and bries soleil.

We convince our fabrication team that they can produce metalwork of high quality and of this size within the timescale. We organise pre-order meetings with our suppliers, and once orders are made, a production schedule is produced.

Our manager and foreman make about four visits to each supplier to view progress and discuss any concerns and issues, and set a date two weeks before to build all the components of the hub units.

Engineering drawings for a hub of 13.1-metre radius are produced – a size never manufactured before – and we decide to build it ourselves.

On completion, it is viewed by Vauxhall, Marshall Design and Jon Pope, the stand’s lighting designer.

We devise a fixing method for items such as blinds to the hub system, which avoids drilling or damaging the metalwork in any way. This is an important consideration, because the hubs may be used again without blinds.

We take responsibility for checking the measurements of every item before finishes to steelwork are applied. The checking permits no levels of tolerance at all.

Individual packing cases are built with a coded system for each component; and a build-up and pull-down schedule of the hub units is produced.

Daily production meetings are held with all departments throughout the process. Just prior to going on site, we experience – along with the entire country – the problems of the fuel crisis. Some suppliers are unable to deliver, and we have to collect component parts from all over the country. We are able to do this because we keep our own stores of fuel.

We finally go on site at the NEC in Birmingham to build a stand which will accommodate not only cars and vans, but also a coffee lounge, Vauxhall Master Fit workshop and an interactive feature – “The Professor’s Laboratory”.

We have an 87-strong site crew dealing with 120 sheets of grey-tinted toughened glass, 40 tons of especially extruded aluminium and steel, 700 metres of black box section truss carrying a 3,600sq m blackout ceiling, and 590 lights shining down on nine different colours of carpet.

In addition, we are mounting 340sq m of full colour photographs on walling that takes 1,700 sheets of MDF and 320 gallons of paint.

The International Motor Show opens with a Vauxhall stand which throughout its development stages has stayed faithful to the original concept, and is a testament to the value of early development and careful planning and co-operation between designers and contractors.

Steve Barratt is chief executive of The Early Action Group

Quick-witted Internet users could become very rich this year, thanks to an online treasure hunt game which threatens to become as popular as Who Wants To Be A Millionaire? In Treasure Hunt 2001, shadowy author Max Valentin is offering $1m to surfers who can solve a series of labyrinthine puzzles and track down a fictional […]

Banks Hoggins O’Shea/FCB has created its first £2.5m ad campaign for Ferrero UK’s Tic Tac brand. Called The Small Guy, the ad, which breaks on January 17, features a man who is less than four feet tall, but very chic. He attracts a beautiful, tall woman back to his flat where he flips a Tic […]

In your article, “A Time for Gifts” (MW December 14) you acknowledged that publicity and educational work are two of the NSPCC’s objectives, enshrined in its charter. The organisation has addressed these objectives and earned new money to do it with obvious effectiveness, surely that is laudable. Yet you failed to consider the bigger issue, […]