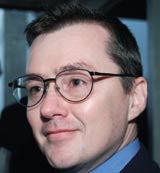 The decision ends weeks of speculation over Eddington’s replacement, with mooted candidates including the airline’s top marketer Martin George. Commercial director George was touted by insiders as one of two internal candidates – alongside finance director John Rishton – for the job. Observers say George, 42, may have been considered too young for the position. However, Walsh himself is only 43. He joined Aer Lingus as a cadet pilot in 1979 and rose to chief operating officer in 2000.

Walsh became chief executive following the September 11, 2001 terrorist attacks and resigned in November after the state-owned airline rejected proposals for a management buyout.

Eddington joined BA in May 2000 and will retire at the end of September. During his tenure he has overseen a cost-cutting programme that has claimed 14,000 jobs. He is due to present a two-year business strategy to investors this week.

BA has weathered a number of crises under Eddington, including the rise of no-frills airlines, the economic slump, the fear of terrorism and war in the Gulf. The airline’s image has also been damaged by strikes in the past two summers.