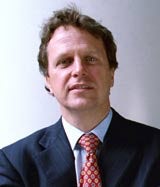 Former Barclays group marketing director Simon Gulliford is understood to be in the running to replace Peter Bamford as chief marketing officer at Vodafone. The package could be worth well over &£600,000 a year.

Bamford, one of the last remaining members of Vodafone’s “old guard”, was ousted by under-fire chief executive Arun Sarin last week. The move was a result of a global marketing restructure.

Gulliford, who was among the UK’s most high-profile marketers until he left Barclays after three years in 2004 to resume his consultancy career, is believed to be one of two front-running candidates in talks with the mobile giant.

Former Orange vice-president of brand marketing Jeremy Dale, who occupies a senior international marketing role at Motorola, has also been linked to the role.

The two most likely internal candidates are global consumer marketing director Frank Rovekamp, who has taken on Bamford’s duties on an interim basis, and global director of marketing and brand communications David Wheldon, a former European president of BBDO.

They both reported directly into Bamford but it could be telling that Rovekamp, a Dutchman who was previously marketing director of Vodafone Germany, has been handed Bamford’s responsibilities in the short term.

Gulliford, who launched Heat during his time as marketing director of consumer magazines at EMAP, would be a popular choice with one of Vodafone’s roster shops, Bartle Bogle Hegarty. He appointed the agency to handle Barclays’ &£20m advertising business less than six months after joining the bank (MW August 2, 2001).

It is understood that Jan Hall, one of the UK’s leading boardroom headhunters, may be involved in the search for Bamford’s replacement. Hall left Spencer Stuart last year to set up her own practice, the JCA Group.