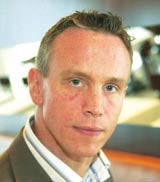 Hope Milne is expected to join the company next month and will work alongside SMG Access managing director Kathryn Jacob before she goes on maternity leave. He will handle her responsibilities while she is away.

He was responsible for setting up RSVP, the cross-selling team for Capital Radio Group, IPC Ignite! and Viacom Brand Solutions last year. But he was made redundant from the radio group following its merger with GWR Group earlier this year.

Hope Milne joined Capital Radio in 2002 from MediaCom as head of sponsorship and promotions. He was promoted to head of brand sales the following year (MW May 22, 2003). His role was then extended to include the content development department, which was formed under a restructure of the group’s commercial sales team, and included RSVP (MW July 22, 2004).

Last year, SMG Access negotiated a two-year, &£1m cross-platform deal with Unilever to advertise across all of the Scottish Media Group brands. In exchange for the programming, SMG receives sponsorship from Unilever.

Heineken is reviewing its multi-million pound international advertising business, held by Wieden &amp; Kennedy Amsterdam, and has already asked UK agencies to pitch. The review, which is being handled by Agency Insight, will not affect the £6m UK business held by Clemmow Hornby Inge.

It is estimated that spam makes up 80 per cent of all e-mail traffic. Marketers are taking the blame for these messages, but government help is the best way to combat this problem, says Martin Croft

The Diary has received all sorts of unmarked and unsigned mail over the years. The razor-blades always come in handy, and the poison-pen letters can be redrafted and sent on to sponging relatives. Even the ticking box that arrived this morning will no doubt prove indispensable as a metronome, or deathwatch beetle bait (the Diary’s […]