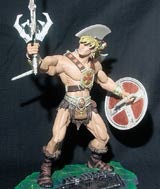 Jordan will take up her post as head of a reshuffled marketing team at the end of the week. She was previously business unit director for grooming and personal care at Gillette, but left this month after a reshuffle at the company in February eroded her responsibilities (MW April 10).

Jordan says her first duty will be to “restore strong organisational support” to a marketing team which has lacked a leader for nearly two years. Mattel originally decided to split the marketing director’s responsibilities between Sara Bowers and Simon Waldron, business unit managers for the company’s girls and boys/pre-school divisions respectively.

Bowers will be promoted to Jordan’s deputy, with her role expanded to encompass management of the consumer services department as well as trade marketing and market research. Waldron will be moved to a senior global marketing role at Mattel’s US headquarters.