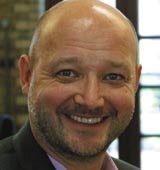 Richards resigned from Grey last year after the appointment of Garry Lace as chief executive. Since then, he has taken consultancy roles with a range of clients including Accenture.

He says that his role at Wolff Olins will be to oversee all operational processes including finance, and also to assess the quality of Wolff Olins’ output. “Wolff Olins is the leader in its field, and staying ahead is more difficult than trying to catch up,” he adds.

At Grey, Richards headed the flagship Mars and Procter &amp; Gamble accounts, before being made managing director in January 2001. Prior to joining Grey in 1997, he worked for McCann Erickson and J Walter Thompson, where he started his advertising career in the finance department in 1982.

Omnicom bought Wolff Olins in 2001 for an estimated &£30m. One of the best-known consultancies in the corporate identity and branding industry, it was responsible for BT’s controversial piper corporate identity in the early Nineties and also for the identity of mobile phone company Orange. More recently, it helped Abbey National become Abbey, developed a new corporate logo for Unilever and advised Hotpoint on its new umbrella identity.

180/TBWA has created an Adidas campaign for Euro 2004 starring a number of footballers, including David Beckham, riding scooters to the championships in Portugal. The Italian Job-inspired ad will use Quincy Jones’s Caper Time soundtrack, licensed by BMG Syntank, and breaks next week.

Euro RSCG Worldwide has appointed the chief executive of its New York and San Francisco offices, Ron Bess, to the new position of regional director of North America.