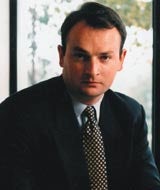 Myers, who started work at the academic bookseller on Monday, joined Hasbro Interactive as international marketing director in 1999 and was promoted the following year to international managing director (MW March 9, 2000) before leaving two months later.

Blackwell’s chief executive Philip Blackwell says: “Myers will bring a range of experience and knowledge, together with a strong sense of focus and drive to lead the business.”

Myers’ last job in retail was as associate marketing director of Somerfield, but he left the supermarket following a restructure of the marketing department in 1998. He has also worked at Marks &amp; Spencer.

Myers says: “I have known Blackwell’s since my days as a student in Oxford and I look forward to helping the business realise its true potential.”

In April, the family-owned chain acquired 12 James Thin academic bookshops in Scotland for &£2m, taking the total number of Blackwell’s branches to 72.

The chain has a nine per cent stake in Oxford-based Blackwell Publishing, which is run separately and is the subject of a &£300m bid by rival academic publisher Taylor &amp; Francis. The unresolved bid for the publishing company has threatened to split the Blackwell family.