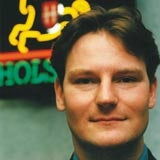 It has been reported that Edge was going to premium chocolate manufacturer Lindt as its chief marketer. However, he has been working as a marketing consultant at Tussauds Group since quitting Holsten last June and has decided to stay there in a full-time capacity. His appointment is part of a larger overhaul of the sales and marketing functions at the leisure attraction group.

While at Holsten, Edge was responsible for ending its sponsorship of Tottenham Hotspur Football Club and reappointing TBWA/London after holding an agency review.

Tussauds is reviewing its advertising agency for its theme parks, which include Alton Towers, Alton Towers Hotel and the Splash Landings Hotel, Chessington World of Adventures, Warwick Castle and Thorpe Park, with the help of AAR. Cheetham Bell JWT is the incumbent on the account and is invited to repitch.

In a separate move, Madame Tussauds head of marketing Paul Moreton has left his role to join UKTV as head of brand development for factual channels.

He joined Madame Tussauds from Madame Tussauds New York in January 2002 and oversaw a revamp of the waxworks in a drive to make it more contemporary and interactive. Attractions have included models of stars such as Britney Spears, David Beckham and Kylie Minogue.

Madame Tussauds, which is not believed to be reviewing, uses Heresy as its creative agency.