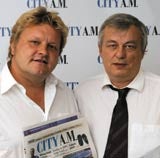 Former Metro international executives who launched London business freesheet City AM are understood to be planning City AM launches abroad.

One press buyer says: “Having an international offering would put City AM in a strong position as far as advertisers and international campaigns go.

“It would be a very positive move for a great product, but it’s still too early to say exactly who is reading the paper and we won’t know for sure until the National Readership Survey (NRS) starts covering it.”

The NRS says: “To qualify for NRS coverage, our monthly sample of 36,000 people must include 175 who read City AM the previous day.”

Muncaster denies that plans to go abroad are in place and says: “City AM is growing beyond all expectation, but we are committed to distributing in City and Canary Wharf only.”

Torpe and Muncaster previously worked together at Metro International, which has launched 59 newspapers in ten years and now reaches 18.5 million readers in 19 countries.