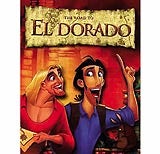 DreamWorks has appointed Franco De Cesare to the newly created position of marketing director for its home entertainment division.

De Cesare was previously European marketing director at Nintendo. He left the games company on amicable terms in August, to pursue a job in the UK (MW August 29) but retained a consultancy role during the handover period, which finished at the end of last month. He started work at DreamWorks this week.

De Cesare will be responsible for marketing the entertainment company’s video and DVD releases, and generating interest in films that have already been marketed at the cinema.

In the past, DreamWorks’ home entertainment business has embarked on mass-market campaigns, but it has also used partnerships with specific websites to generate interest in its films, including an alliance between DreamWorks film The Road to El Dorado and Cartoonnetwork.com.

During his time at Nintendo, De Cesare co-ordinated the marketing of the European launch of the GameCube console and led GameCube’s sponsorship of the official World Cup 2002 website.