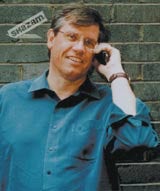 Roest’s previous roles include European vice-president at Compuserve and managing director of Financial Times Online Services. Since leaving NTL last October, he has been acting as broadband adviser to the Prime Minister’s Strategy Group.

Shazam claims to have developed the world’s first real-time song identification service. When users hear a song they like, they dial Shazam’s four-digit number from their mobile, let the music play down the line for 15 seconds, and learn the name of the song and the artist via text message. The company says the technology behind this service is a breakthrough in audio pattern recognition.

The service is scheduled to launch in September, with a database of 1.6 million music tracks. Shazam says it is talking to all UK mobile operators.

Roest comments: “After years of working in the telecoms and Internet sector, I am convinced that Shazam’s application is a must-have service for mobile operators, the music industry and consumers alike.”