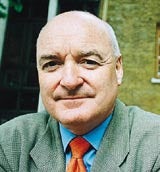 From January next year, the company is to build new scrolling back-lit units at the rate of 100 a month with a target to build over 1,000 by the end of October 2001. Firstlight has also secured a further 1,000 sites.

Each of these units can hold up to 12 posters a time, and can be booked for particular times of the day, allowing advertisers to target specific groups of people, at different periods of the day. Holliday says he is now bringing the medium of time, not just space to the outdoor industry, and claims that this will change the way specialists buy outdoor advertising.

Commenting on his new large portrait format sites, Holliday says: “This means a TV company can advertise what is going to be on television that evening to commuters in the morning, and a different advertiser can target housewives in the late morning.”

The new sites will have a GSM connection to the company’s distribution centre, which means if anything goes wrong with the unit the company will know immediately and aim to rectify the problem within two hours.

The company claims that the sites will have magazine quality presentation