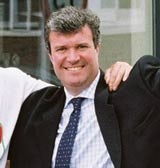 Robertson joins the Volkswagen-owned marque as national communications manager and will work closely with head of marketing Mark McKenna.

Robertson, a former Mini brand marketer, was handed the task of promoting the newly rebranded MG Rover in 2000. He was promoted from manager of Rover UK marketing to UK marketing director at MG Rover, and handled the ill-fated car maker’s &£40m UK ad spend and its sales and marketing operations.

The appointment followed the promotion of his predecessor John Sanders to global marketing director in June. Robertson was subsequently made director of marketing and product services.

Seat is one of the “sportier” marques in the Volkswagen group and its marketing is aimed mainly at young males. Grey Worldwide handles its &£50m global advertising account.

Seat began a review of its direct marketing business in February to improve its targeting of the young male market and to exploit the brand’s sporty credentials. But the departure of Seat’s direct communications manager, Eve Thomas, is believed to have led to the review being called off. It is not known whether it will be restarted.

For the six months to July, Seat sold 16,665 cars in the UK, according to the Society of Motor Manufacturers and Traders, compared with 19,162 for the same period last year – a fall of 13 per cent.

The Advertising Standards Authority has received complaints about an ad for Douwe Egberts coffee featuring a woman talking about her breast implants with the tagline “A cup above”. The ad, created by Minerva, cannot be shown during children’s programming, but four complaints were received after it was aired during daytime shows. An ad for Pizza […]

Universal Pictures International has appointed former Capital Radio commercial marketing chief Gavin Miller as marketing director for its home entertainment division. He will take over the role this week. Miller, who left Capital after its merger with GWR Group, will be responsible for marketing Universal’s DVD releases. He replaces Darren Linton, who has moved into […]

It’s round two in the longest battle in the games market – Sony versus Nintendo. But this time, Sony is taking the fight up to another level. Game over was called in the main console market some time ago with Sony PlayStation, now on its second version, beating Nintendo’s GameCube outright. Despite a new player […]