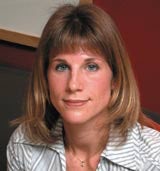 Beverly Shaw, the chief marketer at Expedia, has taken the reins at sister company TV Travel Shop, following the axeing of marketing director Andrea Evans, a former Thomson Holidays brand manager. Shaw will be responsible for both brands.

TV Travel Shop has been working with Mustoes and the company spent £750,000 on advertising for the year to March (Nielsen Media Research), but a spokesman says that advertising will now be handled on a project basis.