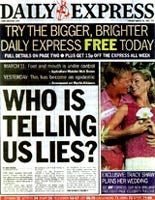 Express Newspapers has split its &£25m media buying account between the three agencies which pitched for the business.

Incumbent agency CIA, which had held the whole account since 1989, has been handed the Sunday Express account, worth about &£12m.

OMD takes on the &£8m Daily Express account, while MediaCom will work with a &£6m budget for the Daily Star.

Stan Myerson, joint managing director of Northern &amp; Shell, which owns Express Newspapers, says: “It is a sign of our commitment to rebuilding these great titles that Northern &amp; Shell has chosen to increase its investment in above-the-line advertising.”

Myerson has more than doubled the advertising budget after Express Newspapers tested an advertising campaign in the LWT region.

Results showed there was an eight per cent increase in the LWT circulation area but a six per cent decrease outside it.

The increase in ad budget brings it in line with Associated Newspapers, which spends about &£25m promoting its titles, including the Evening Standard and Daily Mail.

Since then he has embarked on cost-cutting in order to plough money back into the papers.

Earlier this month he announced 145 editorial redundancies across his titles in order to finance highly paid celebrity columnists.

Desmond’s latest signing is paparazzi king Jason Fraser, who will supply Express Newspapers and OK magazine with celebrity pictures. The contract is believed to be worth more than &£1m a year.