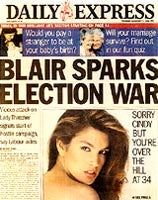 But the real battle for N&S is not over who gets the best pictures of Catherine Zeta-Jones, but over the circulation of the Express titles.

N&S has entered into direct competition with Associated Newspapers’ Daily Mail and Mail on Sunday.

Hostilities have already increased. The Daily Mail is teaming up with OK!’s arch enemy Hello! magazine.

Desmond increased the print run of Monday’s Daily Express to 2 million. The edition carried fresh Zeta Jones-Douglas wedding pictures and featured tokens for a &£1 discount for the next OK! The promotion was supported by a &£2m TV campaign with the slogan “It’s OK! at the Express”.

Desmond is understood to have earmarked an additional &£18m for editorial and promotions. But are his pockets deep enough? The Express titles reportedly have a &£60m editorial budget and spend &£32m on marketing. Associated is thought to spend over &£100m on editorial and &£75m on marketing the Daily Mail, the Mail on Sunday and the Evening Standard.

One media analyst says: “You never want to run up against the Daily Mail because it will grind you down. It is incredibly good at what it does and at spending money to do it.”

The Daily Express has an average net circulation of 1,055,336 for the six months ending October 2000 – down 2.47 per cent year on year. The Daily Mail’s circulation was up 0.79 per cent to 2,389,489 for the same period, according to the latest figures from the Audit Bureau of Circulations.

N&S says it wants to attract “18to 34-year-old, intelligent, independent-minded female” readers to the Express titles – precisely those targeted by The Daily Mail.

Booth Lockett Makin associate director Gary Jones says: “If the celebrity editorial of OK! is followed through into the Express, it could make quite a big draw with women, essentially Daily Mail territory.”

With no time to lose, Desmond has moved his management team in to Ludgate House. N&S joint managing directors Stan Myerson and Martin Ellice have overall responsibility for advertising sales and circulation and marketing, respectively.

N&S paid &£125m in cash for the three newspapers, four websites, including All About Parenting and Company Leader – which may now close – and a 50 per cent stake in West Ferry printers, co-owned by Telegraph newspapers-owner Hollinger.

A dispute could break out over the ownership of West Ferry, which generates most of Express Newspapers’ profit.

Hollinger deputy chairman Don Colson confirms that in the event of a change of control at Express Newspapers, Hollinger has a right to buy the other 50 per cent of West Ferry: “We have not had any discussions with Richard Desmond. We will certainly be reviewing our position and no doubt speaking to him shortly.”

Some industry observers believe Desmond acquired the newspapers in a bid to boost N&S’s flotation plans.

Express Newspapers commercial director Paul Woolfenden says: “Advertisers we have not seen before, such as mobile phone companies, are now coming into the Star.”

N&S appears satisfied with the Star’s positioning: “The Star is already successfully targeting young high-spending, fast-living males and their female counterparts,” it says.

It is believed to be considering a Sunday version of the newspaper and a tie-up with the N&S adult TV station, Fantasy Channel.

But N&S must strike a careful balance – a “nipple count” increase could prove a turn-off for advertisers.

Desmond increased OK!’s circulation from 80,000 a week in 1996 to 455,162 this year. He knows it is circulation figures that count in the advertising community.

“Investment in aboveand below-the-line promotion would attract new advertisers to the newspapers. But in the short term, advertisers will wait to see what the new management does,” says MediaCom TMB’s Goodman.

Desmond faces a tough challenge in reaching his 2 million circulation target in a fiercely competitive and declining newspaper market.