New research has revealed the extent of sexual harassment in the industry, with 26% of people saying they have been sexually harassed at some point during their career – 72% of those more than once and 25% six times or more.

Of those, 34% were women and 9% were men, with a further 30% saying they have witnessed sexual harassment happening to others. 20% of women and 5% of men between the ages of 18 and 24 have been sexually harassed in the first few years of working.

The vast majority (82%) said it was by somebody senior to them. Some also described the involvement of senior management in covering up sexual harassment cases, while others highlighted their role in encouraging staff to flirt with their clients or customers – or put up with unwelcome attention to win, or retain, business.

Less than one in five (17%) have ever officially reported it.

The report is based on the findings of a survey of 3,580 people working in the advertising and marketing industries – and marks the first time the scale and nature of sexual harassment in the industry has  been brought to light.

Sexual harassment is described as anything from verbal comments about somebody’s appearance and sexual jokes to sending sexually explicit images and promises in return for sexual favours, to unwelcome physical contact and assault.

Acting as a benchmark for the industry, it is the first action of the timeTo steering group – an alliance between the Advertising Association, NABS and WACL – which launched three months ago in the wake of the #MeToo movement. Its ambition is to eradicate sexual harassment from the industry entirely.

The results reveal a significant lack of clarity in both the definition of sexual harassment and in reporting systems, as well as fears of career damage – which is perhaps why 83% of victims have never reported it.

It’s not that people aren’t talking, though. 59% have discussed it with a friend and 58% with a trusted colleague.

But of those few who made an official complaint, 59% said they were dissatisfied with the outcome, suggesting a lack of trust in HR and the reporting process.

And when there are loud whispers of cover ups, incidents being swept under the carpet and perpetrators resigning for a few months and then going on to better jobs without repercussion, it’s not surprising that 66% agree that people often get away with it and that 41% of victims are generally ignored or ‘made to shut up’.

On top of that, one in 10 who officially reported an incident indicated that they either resigned, were forced to resign, were made redundant or were sacked as a result. 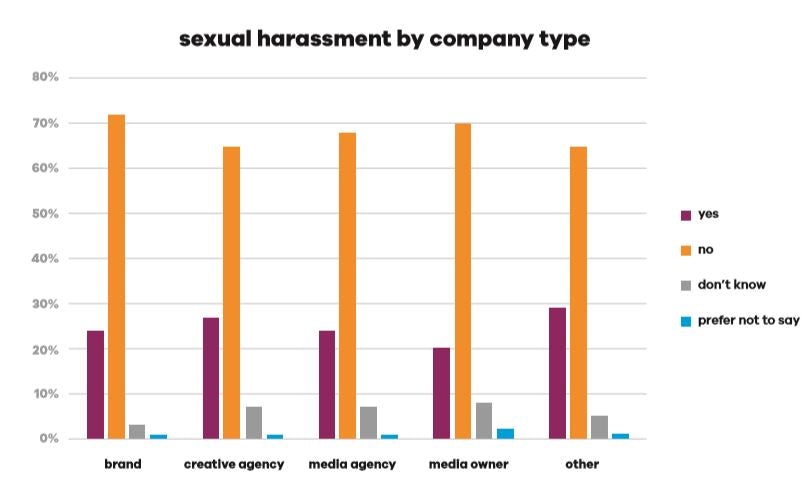 But the results do suggest there is an almost universal desire for action – or at least people say there is – with 96% agreeing sexual harassment shouldn’t be tolerated in the industry.

And then there’s the rest. Three per cent don’t think harassment is ‘that bad’ and think ‘some people just need to toughen up a bit’, while, 8% would ‘just call it flirting or banter’ unless physical assault is involved. Meanwhile, 22% think people are now complaining about things ‘they were perfectly happy with years ago’. 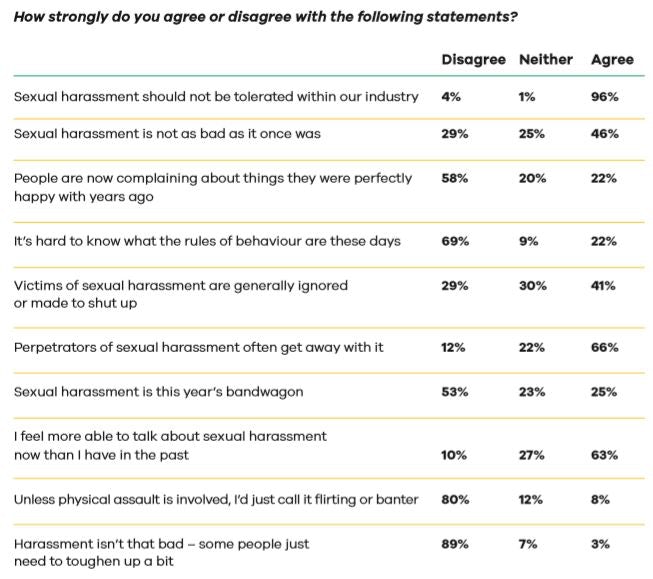 Based on the findings, a 20-page best practice code of behaviour has been drawn up and sent out to companies and associations that have signed up, outlining definitions of harassment, how to take action – whether you work in HR, or experience or witness it yourself – how to effect long-term culture change and a list of sources of support and advice.

ISBA, the body representing UK advertisers, is also encouraging its 3,000+ members – which include Adidas, Aldi, Boots, Heineken, John Lewis, P&G, – to sign up.

READ MORE: Thomas Barta: The #MeToo movement should be a wake-up call for all leaders

Stephen Woodford, chief executive of the Advertising Association, says the next step is to make the code as famous as possible in the industry, and make sure sexual harassment is dealt with properly and becomes more than just office gossip.

“Whether it takes a year or five years, this is a long term, absolutely vital piece of work for organisations to get behind,” Woodford tells Marketing Week.

“The fact that so many people took part in the survey shows us that we’ve got a great latent demand for action. By putting it out in the public domain, people have now got a reference point, they can hold their companies to account.

“We know it’s not going to be an instant flick of a switch and culture’s going to change; these are deep-rooted cultural norms and we’ve got to overturn them. The first stage is to confront them and make the discussions as public, open and transparent as possible.”

TimeTo says it will likely do another survey in a year’s time to see whether any progress has been made. 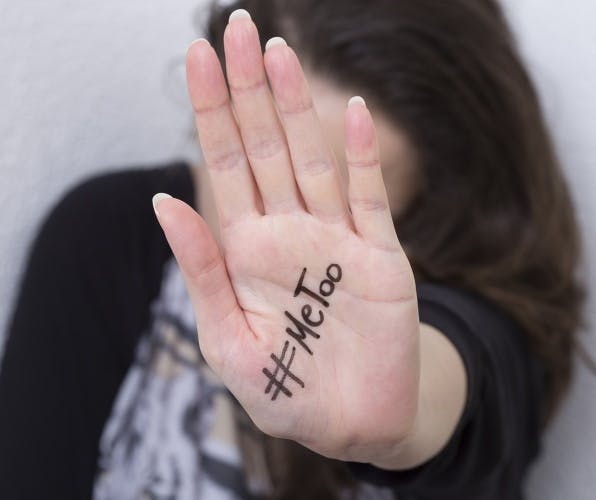 The recent #MeToo campaign is a reminder of the important role we all have as leaders: building confidence. 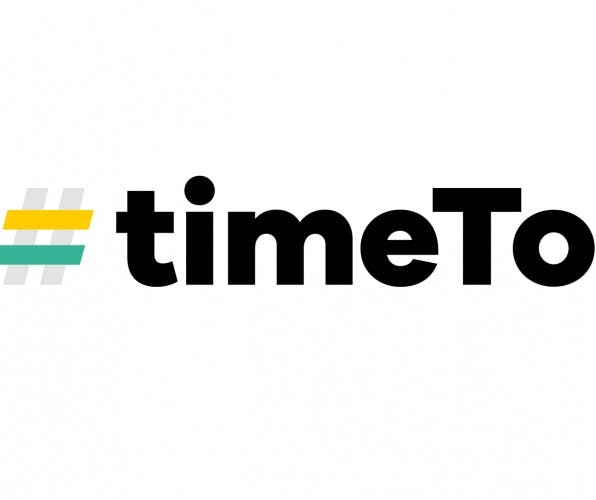 Ad land is looking to get its “house in order” with the launch of the ‘timeTo’ initiative, which aims to combat sexual harassment in the sector.

John Lewis and Waitrose will both add ‘& Partners’ to their names as the John Lewis Partnership looks to make more of their key points of difference amid wider struggles in the retail industry.