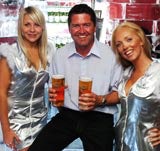 Whatever happened to warm beer? There was a time when it was what we Brits were famed for around the world/ warm, flat beer served by a comely, buxom wench. Now everything is cold or extra cold and The Sun is launching a campaign to protect our buxom wenches, who are under threat from new EU regulations.

The cold beer craze plumbed new depths in Crawley recently, as drinkers at the Tavern on the Green supped what is probably the coldest pint of Carlsberg in the world.

Revellers drank Carlsberg Export Extra Cold from iced glasses, and were served from a solid ice bar, while sitting on iced bar stools (are these people immune to piles?). Outside, a traditional British summer blizzard howled.

Pictured (above right) is Tavern on the Green landlord Steve Monaghan, along with Scandinavian barmaids Angelina Riccio and Aisling Wallace. The Diary is reliably informed that after this photo shoot, Monaghan had to take an extra-cold shower.

Consumers hunger for convenience food and flavoured drinks, but food producers and marketers must be aware of the public’s perceptions of flavours and how these vary from market to market

July saw 2.7 billion text messages sent in the UK, the highest ever total, according to figures released today by the Mobile Data Association. Person-to-person texts sent across the UK GSM network operators during July show an increase of 23.5