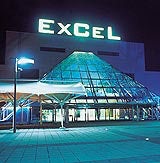 Residing near water is considered good luck by experts in the Eastern art of feng shui. Pointed structures, however, bring bad luck by draining positive energy.

When feng shui consultants inspected the plans for a new exhibition centre in Docklands, they asked that the glass pyramid marking the western entrance should have a flat top. This was done.

It is not just in spiritual terms that London is looking eastwards. Where once the fashionable places were west of Charing Cross -Notting Hill, Chelsea, Mayfair – you are now more likely to hear about desirable property in Shore-ditch, Southwark and Docklands. The City, pushed for space, is heading out towards the flatlands where the capital’s docks once thrived.

This certainly is the hope of ExCeL, the £250m exhibition venue being built on a 100-acre site on the Royal Victoria Dock. The first part is scheduled to open on November 20 in time for the Automotex automotive technology exhibition.

Phase one of the project will feature 60,000 square metres of pillar-free exhibition space across two halls, flanking a central boulevard of cafés and Web kiosks.

There is also 5,000 square metres of break-out space and a self-contained conference centre. The seminar space comprises 33 meeting rooms, overlooking the dock, which can accommodate between 20 and 228 delegates. The separate 3,600 square metres conference centre comprises 11 individual suites, four of which can be combined to form one large facility with a capacity of more than 1,000.

Reception areas at either end of the centre lead directly into the suites, so two different conferences could run without clashing. The exhibition space includes sound-proofed moveable walls; in theory eight to ten shows could be held at once, though smaller ones might wonder about the level of service they would get in the shadow of a much bigger event.

But this has not put off Malcolm Whitmarsh, director of the International Direct Marketing Fair at Reed Exhibitions. The IDMF will be held at ExCeL in March 2001, when it will nestle in among shows on Power Electronics and Hydraulics &amp; Pneumatics.

“We’d used up all the space Wembley had to offer,” says Whitmarsh. “At ExCeL we’ll just be using part of one of the halls.” This year’s show, which for the first time includes a Digital Print Pavilion, will run alongside the New Media Marketing event and two new shows, Marketing IT and TelecommercExpo.

Whitmarsh ruled out a move to Earl’s Court because it did not have enough conference space. This year’s 13,000 visitors to IDMF repres ented a ten per cent increase on 1999; moving to ExCeL will allow it to carry on growing.

On the technology side, ExCeL promises great things, advertising itself as the first “smart” venue. It has partnerships with systems supplier EDS, hardware manufacturer Hewlett Packard and communications specialists Cisco and NTL.

Director of IT services Peter Campbell describes its business centre as a cross between a BA executive lounge and an easy Everything. Mobile phones will work everywhere, laptops can be used in several locations and Web access is offered through kiosks on the central boulevard and elsewhere.

Live webcasts will also be possible. One PC gaming show is negotiating to have a hall filled with networked PCs on which games can be played.

Services can be ordered in advance through the Web, encouraging delegates to commit themselves by booking a car slot or meetings with exhibitors, for example. In future, it may be possible to book a hotel room from the site, order a phone number that follows you from the hotel room to the exhibition hall and have consolidated billing for all those elements.

The second phase of the ExCeL plan is no less ambitious, intending to take the building up to 155,000 square metres, making it a serious rival to Birmingham’s NEC.

The decision to go ahead is still in the hands of bankers but it is hoped that construction will start in 2002 and be finished by 2004.

Designs can be adjusted in the light of any lessons learned from phase one, explains ExCeL commercial director Keith Greetham. After criticism that it does not have enough conference space, for example, phase two will feature an area that can accommodate up to 2,700 delegates. Once completed, the venue will have more than 150 meeting rooms.

Another suggested alteration is to create an area with higher ceilings to cater for the masts of large yachts, now that The Boat Show has agreed to move to ExCeL in 2004.

“We’ve run out of space at Earl’s Court,” says Jenny Rawlinson, communications manager for The Boat Show. “ExCeL offers more space and better facilities – and it’s on water. We’ll be able to have boats moored on the dock and they can come up the Thames instead of having to come by road to Earl’s Court.”

Even if phase two is not completed, ExCeL has promised that temporary structures will be built to provide the 90,000 square metres needed for the expanded show.

The water was also an attraction for marine science show Oceanology International, which moves to ExCeL from Brighton in 2002. The dock will be used for live demonstrations and will provide space to moor research vessels.

Versha Carter, project director at Oceanology organiser Spearhead, has reported that some exhibitors were concerned about leaving Brighton because it offered such a good atmosphere for doing business after hours. Docklands still has a reputation for being deserted at night but ExCeL is making every effort to dispel this image, pointing to Canary Wharf’s multiplex cinema and shopping centre. ExCeL’s own plans include building a night club in a listed warehouse, as well as more shops and a crÃÂ¨che.

Delegates will not starve either. The central boulevard and waterside promenade will have more than 20 cafés, bars and restaurants.

ExCeL’s owners are also keen to flaunt plans for seven on-site hotels, providing 1,500 bedrooms and 500 apartments. But no operators have yet been named. Industry observers suggest hotel operators are famously cautious and are unlikely to build on an unproven site. The NEC took 15 years to persuade the Metropole it was a going concern and Islington’s Business Design Centre took ten years to win the favour of the Hilton group. ExCeL will no doubt have its hotels eventually but they may not open according to its optimistic timetable.

In the meantime, there are plans to use hotels in Canary Wharf and Tower Bridge, and the organisers point out that, on a good day, Park Lane is just 22 minutes away on the Jubilee Line, after a journey on the Docklands Light Railway. Unfortunately, though ExCeL boasts three DLR stations, the Underground stops just short of it.

In fact, transport is the venue’s major failing. While it is well-served by roads from the East and has plenty of parking space, it is a long drive and a steep cab fare from the city centre or Heathrow. It is, however, right next door to London City Airport, which has a check-in time of ten minutes.

Some organisers are worried that ExCeL’s remote location may lead to a fall in afternoon attendance. If people haven’t made it there by lunchtime, they may not make the effort to go. But James Rees, director of sales at the London Arena, also in Docklands, has seen no evidence of this. “For financial shows attracting people from the City, it is easier to get to than the venues in the West,” he says. Overall, he believes ExCeL will help the London Arena to win business, by establishing Docklands as an area to be taken seriously.

Other venues are equally bullish in the face of the gargantuan newcomer. The Barbican’s commercial director, Mark Taylor, also welcomes the shift in emphasis from west to east, adding that the smaller venues, such as his, will always have a role in launching new events. With figures from the Exhibition Venues Association noting a steady rise in event numbers (from 660 in 1991 to 843 in 1998), smaller sites will retain their role as nursery venues.

Andrew Morris, chief executive of the Earl’s Court and Olympia Group, admits there will be a temporary shake-up in the industry. “When the NEC opened, they said it would be the death knell for Earl’s Court, but it wasn’t. ExCeL will develop the industry. Shows that have had to compromise on space will be able to move to bigger venues. Earl’s Court Olympia has lost a predictable amount of business to ExCeL, but it has all been replaced.”

Morris suggests ExCeL will come into its own on big trade shows needing large amounts of equipment, thanks to its three-lane lorry access and 30 entrances. However, he reckons it will not appeal so strongly to consumer events, the industry’s major growth area.

“If you were going to a show in Milan or Paris, where would you rather go – an out-of-town site or the city centre?” he asks. “For some shows the experience of London is vital.”

But not for others. ExCeL already has 120 events scheduled for the first year and is expecting more than 2 million visitors. Shareholders include weighty organisers such as United News &amp; Media and Reed Exhibitions and coupled with its flat-topped pyramid and auspicious running water, a substantial amount of business is guaranteed to flow its way.