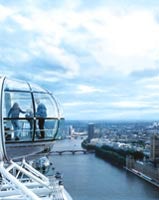 British Airways’ London Eye is to run a radio and poster advertising campaign, portraying how simple it is to ride on the attraction.

The attraction cliams that the new campiagn does not imply any decline in vistor numbers during the current tourist slump.

The campaign, which will run on radio and outdoor in London and the South-east, has been created by Joshua. It launches on November 5 and will run until December 16.

The tagline for the campaign is “Waitless”, about which a spokeswoman for the London Eye says: “We want to counteract the misconception that there is a long waiting list for tickets and a long queue when you get here.”

She claims this is not due to a fall in customer numbers but to better management of the variable capacity of the Eye, which has the potential to increase capacity for walk-up sales when necessary.

She adds that website booking now generates 50 per cent of ticket sales, while the impact of the US terrorist attacks on September 11 was small – 75 per cent of London Eye visitors are from the UK.

Marketing for the London Eye is usually PR-led, although Joshua did work on radio ads in June.

ITV Digital’s Monkey is becoming something of a celebrity. In a case of life imitating art, he is this week being interviewed by national magazines. “He’s become high profile,” says a spokesman for the Monkey, which was created by ad agency Mother. “Journalists can ask him anything they want. He can even do CD reviews […]

Italian brewer Peroni has announced that it is reviewing its Â£3m creative advertising account, less than a month after appointing a marketing chief.

Coca-Cola is to slash the value of its sponsorship of ITV’s The Premiership following the decision to reschedule it away from the Saturday 7pm peak slot – first predicted in Marketing Week (October 4). In June, the soft drinks giant agreed to pay more than &£50m for a three-year contract covering its sponsorship of The […]