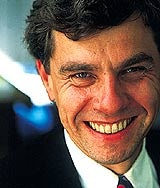 United News &amp; Media (United) is poised for an acrimonious showdown with Pearson at a board meeting of Channel 5 shareholders tomorrow (Thursday).

United executives are understood to be furious that Pearson announced the appointment of Richard Eyre as C5 chairman without consulting them. Eyre is chief executive of Pearson TV.

One insider says: “There’s pique there because it [United] didn’t know about the deal. It may use this issue to complain about the high-handed way that CLT and Pearson wanted to do this. But I can’t see United digging in on this issue.”

If United’s own merger with Carlton goes through later this year, it is expected to sell its stake in C5.

In the merged Pearson/CLT, Eyre will become director of strategy and development. CLT-UFA chief executive Didier Bellens and chief operating officer Ewald Walgenbach will take the same roles in the new group.

One observer claims Eyre – who joined Pearson three months ago from ITV – was offered the C5 chairmanship as a “sop”, as he will be effectively “demoted” to third in command in the expanded group.

But a Pearson spokesman argues that Eyre will see his role greatly expanded because he will continue as chief executive of Pearson Television, but with added responsibilities.