Skoda has transformed its brand image from Communist-era laughing stock to respected and fast-growing car marque. But the failed launch of its Fabia Sport model earlier this year could leave the Volkswagen Group-owned Czech brand’s competitors with the last laugh.

Skoda has been forced to redesign the Fabia Sport (MW last week), which has suffered poor sales since its launch in February. The model is being trimmed down to appeal to the youth market and to rival “supermini” cars.

This hasty repositioning of the Fabia Sport may suggest the tide has turned against a brand that overcame negative perceptions by confronting them head on.

Since VW took control of Skoda in 1991, the Czech marque has become one of the fastest growing car brands in the UK, where it achieved record sales three years in a row. Last month, the company sold 31,240 cars for the year to date in the UK, giving it a 1.7% market share.

According to Mike Moran, a consultant at The Automotive Partnership, Skoda’s “brand renaissance” came into effect at the start of this decade when then marketing director Chris Hawken appointed Fallon to produce a campaign for its new Fabia, which made fun of the UK perception of the brand.

“Hawken used the brand’s status as the butt of driving jokes, and turned it into the centre of the brand’s campaign – a risk that paid off. Brand awareness increased massively and Skoda became a brand to be seen in, and not laughed at,” Moran says.

Hawken says: “Prior to Fabia, the Skoda badge was seen as a joke in the UK. I wanted to change this and set about repositioning the brand into one people would want to be seen in.”

In 2000, Fallon unveiled a campaign for the new Fabia, bearing the strapline: “The Fabia is a car so good that you won’t believe it’s a Skoda”. By the end of the year, more than 11,000 Fabias had been sold and there was a waiting list for the cars.

The ad campaign raised Skoda’s profile and scooped many advertising awards, including one from Marketing Week, while the model won the prestigious Car of the Year award.

To maintain the transformation in perceptions, Skoda’s next campaign used the strapline “It’s a Skoda. Honest” to capitalise on the change in attitudes noticed after the Fabia campaign.

Mary Newcombe, Skoda’s current head of marketing, says the campaigns left their mark on the brand. “The 2000 Fabia campaign was a real transformation in fortunes for Skoda. We are now a stronger brand than competitors like Volvo and Seat. It’s almost like we were a best kept secret.”

Fallon and Skoda also came up with the cake ad, which used 448 brick cakes to create a Fabia model. “It was considered a bold move for us not to actually show a metal car, but the impact has been huge,” says Newcombe. “People connected with the ad.”

Fallon managing director Karina Wilsher adds: “The aim was to demonstrate Skoda as a manufacturer for happy drivers. The comfortable tone relaxes viewers and helps them feel positive towards the brand.”

However, Skoda’s latest launch hasn’t made many drivers happy, which is why it is being relaunched. While Skoda has reconstructed its image over the past decade, the failure of the Fabia Sport is evidence that it may be losing its golden touch. After all, there’s more to a successful car brand than clever advertising campaigns, however humorous they may be. 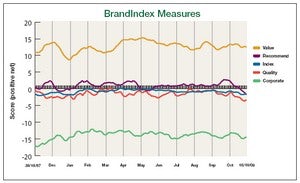