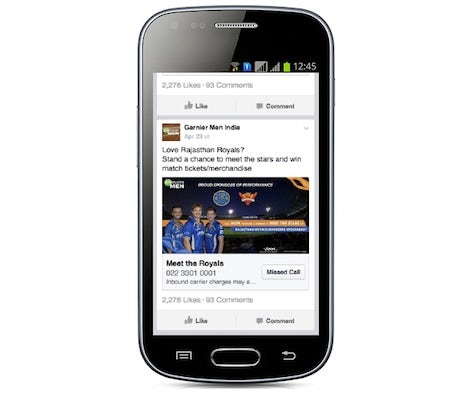 The first of these is rolling out in India, where the social network is hoping to take advantage of “missed call” behaviour. This is where people dial a number and hang up before it connects to send a message to friends that they might be outside or need picking up.

It is already used in more traditional ad formats, such as print, with brands running ads that let customers phone a number that will then give them a call back and offer content and a message from the brand.

This is a shift in approach for Facebook, which has previously launched new ad products in the US before scaling and rolling them out to everyone globally. That will still happen but Facebook now wants to do a “better job” of localising its products and ad suite.

Facebook has been testing the ad with L’Oreal’s Garnier, letting users give brands a missed call by tapping on ads shown on their mobile phone. The trial saw Garnier offer an opportunity to meet the Rajasthan Royals, one of the cricket teams in the Indian Premier League, alongside a customised message from Garnier.

Facebook claims the ad reached 15 million people and generated 16 times more calls and was 94 per cent more efficient on a cost-per-call basis than similar ads used in traditional media.

Speaking to Marketing Week Kelly MacLean, who leads Facebook’s emerging market ad team, says Facebook is keen to learn about local behaviour and then see how the social network can tap into that to help brands reach more consumers. It plans to roll out further ad options for specific countries.

“We are looking at how we are able to accelerate the development of new local ad solutions built for advertisers in emerging markets. We want to understand if there are ways for us to better personalise our product offering in these markets,” she says.

This started a year and a half ago when Facebook started providing marketers with the ability to target consumers on feature phones, which they couldn’t do previously. It is now taking that further, letting them target by factors such as whether users are on a 2G or 3G connection.

It is also changing how its targets customers by location dependent on the country, for example in Brazil and India allowing regional targeting rather than just by city or state.

It is also introducing life-stage targeting in emerging markets so that brands can reach groups of people such as mums, new dads or people that have just started a new job. Plus, Facebook is working with Nielsen to provide better mobile measurement solutions on feature phones, allowing brands to measure factors such as sentiment, purchase intent, ad recall and message effectiveness.

“We want to provide brands with the marketing ability to use local targeting that might be more relevant,” says MacLean.

Facebook hopes its efforts will help brands target customers in emerging markets where media fragmentation and expensive broadband connections have typically made it difficult. Many consumers in these countries go to Facebook through feature phones with limited functionality, rather than desktop PCs or smartphones.

Facebook is also hoping to boost its revenues as user growth in more mature markets such as the US slows. India, for example, now has more than 100 million Facebook users, up from 8 million four years ago. However, MacLean says this will not be at the expense of the user experience.