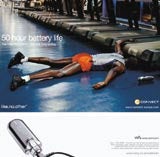 Fallon has created a national outdoor and online campaign for Sony’s new range of Walkman MP3 players. The campaign will use the new global Sony brand line, ‘like.no.other’, and will emphasise the Network Walkman range’s key benefit over the market-leading Apple iPod – its 40- to 50-hour battery life. The six-sheet posters and online executions feature a series of young fitness fanatics who have tried – and failed – to outrun the MP3 player. Sony Electronics is aiming to revitalise its brand in the light of competition from such brands as Apple iPod and Samsung with a â‚¬150m (£103m) European campaign. Fallon picked up the business in November 2002, following a pitch that included incumbent agency Saatchi &amp; Saatchi. Media planning and buying is handled by OMD UK.