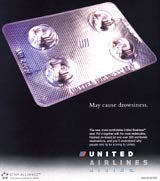 The airline awarded the business, worth about &£5m in the UK, after a two-way pitch between the incumbents Fallon and Young &amp; Rubicam.

Publicis-owned Fallon has handled the US creative work, the bulk of the business, since 1996. Y&R has handled advertising for the rest of the world, which is worth about 35 per cent of the advertising spend.

The review was called because the airline wants a consistent global advertising message. The airline also hopes the review will be a cost-cutting exercise after it experienced a difficult summer.

Fallon has been appointed at an important time for the airline. Last week it announced plans to buy rival airline US Airways for $11.6bn (&£7.9bn). The merger of the two airlines will create the world’s largest carrier, and if it passes the regulator it will allow UA to control half of the US air-travel market.

It is not known if media, which is handled by Media Edge, will be reviewed.