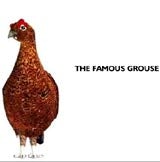 The whisky-based liqueur will compete against Drambuie, and will initially go on sale for six months in 230 Tesco stores nationwide as well as 22 Sainsbury’s stores in Scotland.

Emma Scarratt, senior marketing manager at Maxxium UK, which distributes The Famous Grouse, says: “The whisky-based liqueur market, unlike the cream-based sector, is very static and needed some reinvigoration. The Famous Grouse Liqueur has been launched with a unisex appeal, as it is neither harsh nor heavily sweet. It is primarily designed for after-dinner drinking for the over-40s, but we are not ruling out the slightly younger existing drinkers of the whisky brand.”

There are no plans to invest in advertising or marketing in the product’s test phase. But a spokeswoman for Maxxium UK adds that the company would consider advertising activity following a nationwide roll-out.

Last year, AMV.BBDO created television ads featuring a grouse swooping and somersaulting to an excited football commentary, with the tagline: “A quality finish.” Another ad showed a candlelit table, laid with two piles of birdseed. The grouse then lowers the lights and strolls off to meet his date as the tagline “A quiet night” appears on-screen.

Mercier Gray has created a Â£1.2m launch campaign for Codemasters’ Pop Idol – The Official Video Game. The advertising will break in November. Media is handled by MJ Media.

CBM Media has reached agreement with 12 national sports bodies, including the British Judo Association, England Hockey and the British Cycling Federation, to launch a free-to-air digital channel on satellite, cable and Freeview in 2004.