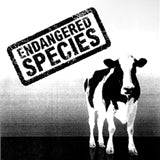 A group of British farmers has taken the unprecedented step of launching an advertising campaign about food shortages in the UK to raise awareness of problems in the dairy industry.

The national press ad features an image of people standing in a line under the heading “Queuing for food again”. The execution warns that in the event of a major crisis, such as a fuel shortage or terrorist attack, the UK would run out of produce.

A leaflet campaign shows a cow under the words “Endangered species”, the line “Milk short, you’re caught” and facts about issues facing the dairy industry.

The group claims it is not “anti-government, or commercially or politically motivated” but information it provides reveals that, after the outbreak of foot-and-mouth disease in 2001, farmers were told to be “custodians of the countryside” rather than food producers, and policies have been in line with this.

The group is calling for fair prices for dairy farmers, the powers of supermarkets to be reined in and the public to raise the issue with MPs. But the Food and Drink Federation dismisses the group’s claims. A spokeswoman says: “If there was a crisis the UK would cope because of the diversity of its food sources. This campaign is just coming from the dairy farmer’s perspective.” But Food Commission spokesman Ian Tokelove agrees with the farmers: “Supermarkets are based on a 24-hour turnaround and have no surplus stock.”