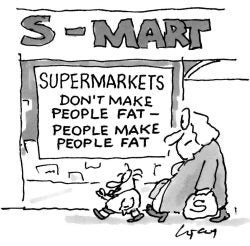 I know it comes hard, but there are times when, in the interests of judicial impartiality, it is necessary to take a deep breath, suppress one’s finer feelings, quell the urging of nature, and – no matter how great the discomfort, nor how readily the words stick in one’s throat – be nice to the supermarkets.

With a great effort of will, put aside all thoughts of three-for-two offers and clogged checkouts, farmers driven to the wall by predatory pricing, exotic fruit flown half way round the world, legions of lawyers hired to pursue planning applications, local traders ruined, and a megalomania that compels these retailing behemoths to seize business from whatever quarter until they, like Alexander, have no new worlds to conquer. For though their faults are many and grave, it is nevertheless true that the supermarkets are not all bad. Rotten they may be, but not to the core.

I am driven to this outburst of magnanimity by Joanna Blythman, author of Bad Food Britain, who excoriates the supermarkets as “the dietary enemy”. The simple truth, she says, in apparent ignorance of the fact that the truth is never simple, is that: “What is making Britain fat is heavily processed, so-called convenience foods… and who sells most of these convenience foods and, indeed, has a massive vested financial interest in continuing to sell them? The supermarkets, of course.”

I do not question the remainder of her analysis. When she calls for a rediscovery of the ability to cook properly – the basic skills of “creating cheap but nutritious meals from fresh ingredients” – she is no doubt whistling in the wind, but it is a well-fashioned tune all the same.

To blame the supermarkets for making Britain fat is to treat the symptom and not the cause. In providing convenience foods, the supermarkets, for all their faults, are performing the most basic of economic and marketing functions, and doing so with exemplary skill. It is the purpose of every retailer, and indeed of every business, to spot a demand and to meet it. That there is a huge and growing requirement for ready-made, microwavable meals – however disgusting to the palate of those who know and have tasted better – is no fault of the supermarkets. The reasons for the phenomenon are many and complex but can be summed up in the terse and irritating phrase “society has changed”.

Families have changed, working life has changed. Gone for the most part are the close-knit nuclear families of recent memory, of fathers who went out to work and of mothers (who, remarkably, were almost always married to the fathers) who stayed at home and, among others things, cooked nourishing meals that were eaten by parents and children together. This is all so obvious it hardly needs to be said, but its implications are overlooked when we awaken to discover ourselves the fattest and most poorly fed nation in Europe, and look around for someone else to blame.

That most women now go out to work has profound consequences, not least of which is that they and their live-in partner persons are too cream-crackered at the end of a hard day’s toil and commuting to roll up their sleeves and start peeling carrots. Far easier to use part of the proceeds of a double income to buy Sainsbury’s ready-made chilli con carne with added gloop and bung it in the microwave. It satisfies a demand.

The reasons why women go out to work are varied and no business of the supermarkets, who, incidentally, employ a great many of them. Feminism, high taxation, the soaring cost of housing and the burden of mortgages, all play a part in the decision to go out and earn, and to forego the traditional role of housewife and cook. Of course, convenience foods are a poor substitute for real, home-cooked food, but when there is not the time, the will, or the knowledge to prepare meals at home, what is the alternative? The law of unintended consequences plays wonderful tricks, and it is an unbending law of sociology as much as physics that every action has a reaction. How were we to know that when we discarded the familial relations of the ages in favour of something new and liberating, it would make us fat? But don’t blame the supermarkets. It makes as much sense as blaming the manufacturers of lifts for depriving us of exercise, or castigating the makers of televisions, computers, cars and power tools for turning us into idle slobs. It is by our free will that we are fat.