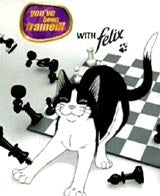 It is the first time that Felix has sponsored a television show. The sponsorship credits and breakbumpers feature Felix – the cat – in a series of animated adventures, which reflect his cheeky nature and the theme of the programme. BMP DDB created the idents for the sponsorship, which airs on Saturday (May 4).

The sponsorship, which was negotiated between Granada Enterprises and OMD Affinity, targets housewives and families.

Nestlé spends &£2.3m a year on advertising the Felix brand, according to AC Nielsen MMS.