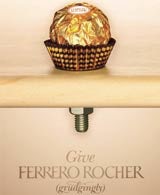 Ferrero, the Italian chocolate manufacturer, is understood to be talking to agencies about the &£5m pan-European advertising account for its flagship Ferrero Rocher brand. It is thought to be in the early stages of the review.

Ferrero’s in-house agency Pubbliregia is understood to be the incumbent agency on the European account but it is not clear if it will be involved in the review process. The UK account for Ferrero Rocher will not be affected by the review.

The review follows a number of changes to the UK roster, which were carried out late last year. The chocolate company appointed Clemmow Hornby Inge to handle the &£4m Kinder Bueno account in November and handed responsibility for the Ferrero Rocher brand in the UK to WCRS, which handles its Tic Tac brand. Ferrero also works with Nitro on its Giotto adult biscuit brand.

Previously the European marketing team has preferred to work with the in-house creative agency, which created its infamous 1980s ambassador’s party campaign.

Ferrero has been focusing on kids’ products and adult indulgence in recent years. It has been building its Kinder brand in the UK with the launch of products like Happy Hippo and Kinder Country, which are aimed at younger children. At the same time Ferrero has launched products like Giotto, which are positioned as a biscuit to go with coffee rather than as a snack.