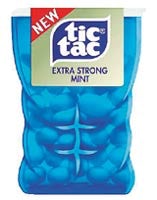 Ferrero UK is to launch a new extra strong Tic Tac backed by a &£4m marketing campaign. The new flavour variant, which is only the second since 1978, will be the first to be aimed at men.

Tic Tac Extra Strong follows the launch of a spearmint variant aimed at women a year ago. Ferrero decided to launch the new flavour after qualitative research showed that there was a gap in the market for a strong mint that is smaller and better packaged than products such as Trebor Extra Strong, but not as expensive as products such as Smint, which retails at about 70p.

The marketing will be led by a television campaign created by WCRS, breaking in April. It will stick with the “Go on shake your Tic Tacs” tagline, which was created for the launch of the spearmint variant, but it will be angled towards the male market. There will also be a national six-sheet poster campaign.

Ferrero has linked up with Domino’s Pizza to offer its customers samples with pizza deliveries. There will also be sampling at Arsenal, Leeds United, Newcastle and Glasgow Rangers football grounds, accompanied by in-stadium advertising and half-time competitions and stunts.

Different, a Newcastle-based ad agency, has created a press and poster campaign for the National Health Service to raise awareness of the dangers of smoking during pregnancy.

David Benady’s special report about creative and media planning (MW January 9) made some good points, but why should it be one or the other? As Kevin Allen says, it’s not a case of either/or, but both together. With the media-neutrality debate confusing the issue further, is it any wonder that many agencies opt for […]

GlaxoSmithKline (GSK) is preparing the launch of a new flavoured water under the Lucozade Sport umbrella brand to target gym users. Insiders suggest that the flavoured water will be called Hydroactive and will be aimed at fitness fans looking for an isotonic drink that helps rehydration and replaces lost minerals after exercise. The appeal will […]