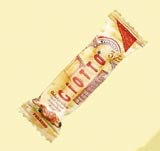 Italian confectionery brand Ferrero is launching an indulgent biscuit product aimed at women. It is understood that the company plans to bring Ferrero Giotto to the UK in March.

The product, which is already available in some parts of mainland Europe, consists of five small wafer balls with a cream-filled centre. The balls will be covered in nuts rather than chocolate. Giotto will be launched as a countline for convenience stores, and in multi-packs for supermarkets, which means that it will be sold on both confectionery fixtures and the biscuit aisle.

The product is expected to be one of Ferrero’s key launches for next year and it will be backed with a significant marketing spend. The campaign, which will be created by in-house agency Pubbliregia, will include television, although full details of the advertising have yet to be revealed.

An industry insider says the product will be positioned as an indulgent but healthier alternative to chocolate-covered products. She compares Giotto to the Happy Hippo biscuit product Ferrero launched under the Kinder brand last year (MW December 11, 2003).