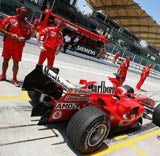 The sport was thrown into chaos last night after eight of the ten teams announced they were quitting the championship to form their own.

The teams – BMW-Sauber, Brawn, Ferrari, McLaren, Red Bull, Renault, Toro Rosso and Toyota – have fallen out with the sport’s governing body the FIA over plans for a voluntary budget cap for all teams from next season.

The teams submitted entries for next year’s competition on condition the budget cap was removed but the FIA has stood its ground over concerns that the sport needs to cut costs if it is to survive the global recession.

A statement from the FIA says the actions of the Formula One Teams Association (FOTA), which represents the eight, and Ferrari in particular “amount to serious violations of law including wilful interference with contractual relations, direct breaches of Ferrari’s legal obligations and a grave violation of competition law.”

Earlier FOTA said in a statement that they “cannot continue to compromise on the fundamental values of the sport”.

The Association added that it will take the “major drivers, stars, brands, sponsors, promoters and companies historically associated with the highest level of motor sport” to the new championship.

The move also casts doubt over media rights for F1. In the UK, the BBC is just one season into a four-year deal to broadcast the championship. A spokesman for the corporation says that it is “monitoring the situation” but had no further comment on whether its contract allowed it to withdraw from the sport.

“We never comment on the details of contracts, because it is commercially confidential information,” he says.

The sport has come under intense financial pressure of late as sponsors and manufacturers reduce investment amid the global economic downturn.

Earlier this year one of the sport’s biggest backers, Dutch bank ING, announced it was cutting its Formula 1 sponsorship spending by 40% as part of a €1 billion cost-cutting drive. This followed Honda retreat from F1 in December.

The video was launched on last night’s season episode of Top Gear, in which Bacardi social responsibility ambassador and seven-time Formula One world champion Michael Schumacher was a guest. The video shows Schumacher illustrating how drinking affects your driving, with viewers encouraged to click through to Bacardi’s Champions Drink Responsibly campaign site. The site features […]

Volkswagen Commercial Vehicles is launching a nationwide integrated campaign to promote its range of lifestyle vehicles.

Delegates at the Marketing Week Live event next week will be able to post questions to conference speakers via their mobile phone browser.