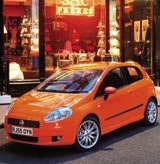 It had been reported that Fiat was set to hold a pitch to find a replacement for Leo Burnett, but Marketing Week understands that Krow will be handed the business in the coming weeks. The agency already has links with Fiat after it was appointed to handle the launch of the Fiat-owned Alfa Romeo Brera last month (MW February 9).

The change of above-the-line agency in the UK does not affect Fiat’s relationship with Arc, which handles its direct business. Leo Burnett also remains Fiat’s pan-European agency of record.

Also last year Fiat appointed Italian agency Armando Testa to handle the &£12m launch of the new Grande Punto across Europe. Fiat has invested its entire advertising budget for the year in the launch.

Since the appointment of Gregory Pingree as international advertising co-ordinator last year, Fiat runs pitches for its major campaigns from its head office in Italy with roster agencies competing against each other.

Neither Fiat, Leo Burnett London or Krow was available for comment as Marketing Week went to press.

Krow, which is “work” spelt backwards, won the account for the launch of the Brera model after a pitch against Mother and Alfa’s pan-European incumbent agency United.

Alfa called the pitch earlier this year (MW January 19) ahead of the UK launch of the new model in April. Krow is currently working on a TV campaign around the launch which will break next month.