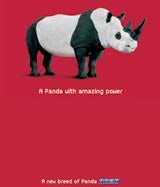 Fiat is unveiling a &£4m outdoor and press campaign, created by Leo Burnett, for the launch of the new Fiat Panda. The launch of the city car comes at a critical time for the ailing Italian manufacturer, which needs to revive flagging sales and its brand image. Unusually, Fiat has chosen not to advertise on television. The ads are aimed primarily at women and feature a variety of animals being transformed into pandas. The campaign also highlights the fact that the Panda has been named Car of the Year 2004. Fiat originally intended to call the car Gingo, but reverted to the Panda name after a legal threat from Renault, which claimed it was too close to its Twingo (MW July 31, 2003). The car will retail from &£6,295. Media buying and planning is by MediaVest.