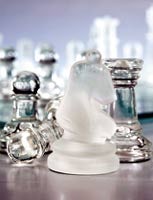 Octagon UK has been chosen by the FÃ©dÃ©ration Internationale des Ã‰checs (FIDE) – the World Chess Federation – to handle marketing and secure commercial partners for the 2003/04 Chess World Championships.

The appointment follows FIDE’s selection of London to host the championships, which start in late November 2003 and end in January 2004. Earlier this year FIDE decided to establish the World Chess Championships as a biennial rather than annual event.

The tournament will see 32 top players compete, with a championship prize fund of $3.5m (£2.4m). FIDE is finalising negotiations for the location of the championship and will announce details shortly.

FIDE president Kirsan Ilyumzhinov says: “We are confident that the city will stage an outstanding event for participants and spectators alike.”

Earlier this year rival organiser the Brain Games Network, postponed its tournament in Bahrain which was due to be held in October. It had been in negotiations for a $5m (£3.4m) sponsor of the event, which will be held in January (MW September 20).