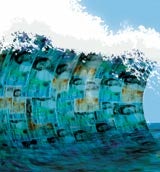 As the funds raised across the UK for the Disasters Emergency Committee’s (DEC) tsunami appeal top £250m, charities are examining how the huge sums pledged by the public for this crisis can be harnessed to kick-start a new era of charitable giving.

The Indian Ocean tsunami, which struck on December 26 killing an estimated 226,000 people and leaving millions homeless, has triggered the greatest outpouring of charitable giving in history. Publicly raised funds and those pledged by governments and international organisations stand at more than £7bn.

Dramatic images of the tsunami and a notion of an overwhelming natural disaster provided a powerful incentive for philanthropy, but the job of garnering a similar response to the crisis of world poverty, with 30,000 children dying each day from preventable illnesses, is not so easy. It lacks the cataclysmic imagery of a tidal wave.

The DEC, a UK umbrella group comprising 12 charities, has wound down its tsunami appeal and many charities involved in fundraising say that they have already raised more than enough to deal with the disaster’s effects in the short, medium and long term.

Oxfam, which ended its tsunami appeal last week, urged people to keep donating funds to other crises such as the famine in Sudan, which it said has become a “forgotten” emergency. Save the Children is trying to build on the tsunami donation frenzy in a new campaign.

Médecins Sans FrontiÃÂ¨res last week offered to hand money back to donors after receiving more than three times the £16m it had asked for. According to one source, the chief executive of one charity is visiting many of its 500 top-level donors asking if the sums they have donated for tsunami aid – many pledges are over £50,000 – can be used for other purposes.

The ring-fencing of tsunami cash raised by charities means the funds cannot be used for other causes and much of the money may end up sitting idly in banks collecting interest.

Meanwhile, other causes are suffering. The “millennium development goals” of halving world poverty by 2015 – signed up to by world governments – are destined to fail dramatically. Charities working in non-emergency sectors could find their donations diminishing this year, while appeals for any coming emergencies may also suffer.

“Part of the problem is that some people feel they have ‘done their bit’, having donated £100 for the tsunami,” says Kevin Power, account director at Proximity London, which runs the Save the Children direct marketing account. He believes the tsunami appeal has also affected other charities such as organisations for the homeless, which have put their winter collecting campaigns on hold because of the DEC appeal.

After so much talk of donors’ charity fatigue over the past ten years, the tsunami donations show that people are prepared to give generously when they are moved and their heart-strings are pulled. But some people believe there must be a radical re-think of the way the public is approached for donations.

There are conflicting views on how effective charity fundraising has been over the past decade, with figures – disputed by some – from the Charities Aid Foundation (CAF) claiming that in real terms the total of £7.3bn raised by charities in 2002/3 has barely changed from ten years before.

The CAF figures show that last year this total fell back to £7.1bn. But there have been rises over the ten years. In 1999 and 2000, the “millennium effect” caused an outpouring of giving, while the updating of the gift aid scheme in April 2000 also increased funds raised. The first effects of face-to-face campaigning started to be felt in the late Nineties, with field marketing agencies signing up people in the street for direct debit contributions to charities. However, this method is considered to have almost reached saturation point and has a high attrition rate. One source suggests that many who are signed up to pay donations by direct debit cancel the debits before the first payment, often feeling they have signed up under pressure. Charities often dip in and out of street activity, conscious that it receives a bad press, but unable to find a more effective way of securing donations. The charity sector has made great use of direct mail over the past 20 years, though some think this may be responsible for the failure to expand the market of between 6 million and 8 million regular charitable donors in the UK. EHS Brann chairman Terry Hunt says: “There is a lot of evidence that there is a static and ageing sector of the population who are engaged with big issues and giving consistently. Charities have been very good at direct marketing, testing different propositions, learning and targeting better. But because they haven’t added the emotional type of media message it has become a reductive strategy, talking to fewer people with the same message.”

Hunt believes that precision targeting through database marketing needs to be widened and “rebalanced” to broaden the audience. “Charities must find a way of getting people engaged with causes and movements in the same way they used to get involved with politics,” he says. He believes direct debits and donations will flow once this has been established.

Others dispute this view. British Red Cross director of fundraising Mark Astarita says: “I’m proud of our voluntary sector: we have got names and brands that stretch the globe. Other countries envy the vibrancy of our voluntary sector, with groups such as Amnesty International, Friends of the Earth and Greenpeace. We have powerful brands and campaigning organisations that make a big difference.”

The tsunami fundraising efforts demonstrate the difficulties of persuading people to donate to long-term causes compared with their willingness to react to immediate disasters. One charity that is trying to move from the image of being a disaster relief organisation is Care International UK. Last week it appointed McCann Erickson to handle a campaign to change perceptions that it works only on short-term emergency projects (MW last week). Marketing director Andy Page says: “When you look at how Care International is perceived against Oxfam, the Red Cross and Save the Children, it is seen to be very similar, and this isn’t the case.”

The politics of poverty

The push to long-termism is evident in this year’s multi-organisation Make Poverty History campaign, which seeks to build awareness of the role of governments in solving poverty and dealing with Aids in Africa. It advocates lobbying through demonstrations, sending e-mails to Tony Blair and getting people to wear white wristbands. Many believe this is the sort of politicised movement that is needed to eradicate poverty.

In an environment dominated by media images, only the most striking change the world. But whether people will heed the pleas of charities to divert their attention and donations away from the tsunami to other needy causes will be a measure of how far the disaster in Asia really has prompted a change in humanity’s attitudes to giving.