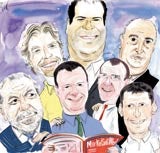 There are no prizes for guessing whose names trip off the tongues of marketers when it comes to rating their peers or those they most admire in the business world.

Both Sir Richard Branson, who has built up a stable of businesses under the Virgin brand, from airlines to mobile phones, and the younger entrepreneur Stelios Haji-Ioannou, founder of easyJet, score highly, coming in the top five. They have done what many marketers dream of, extending and stretching their brands into new product areas. But even these top-flight entrepreneurs have encountered varying degrees of success.

Also in the top five is Sir Terry Leahy, who presides over the UK’s most successful retailer. He is joined by one of his many generals, Tim Mason, who in fact tops the league and is a perennial favourite with marketers.

The power of reality television may have pushed Amstrad’s Sir Alan Sugar into the top five. Having handed out blunt and pithy advice to wannabe entrepreneurs in The Apprentice, Sugar has secured a place in marketers’ hearts.

Other big names that have made it into the top ten include retail king Philip Green and PepsiCo UK and Ireland president Martin Glenn.

But there were also plenty of well-known names mentioned that did not make it to the top of the pile. Among them Honda UK marketing director Simon Thompson, Ryanair chief executive Michael O’Leary, Pret A Manger founder Julian Metcalfe, Trinity Mirror chief executive Sly Bailey and media mogul Rupert Murdoch.

Research company TNS interviewed 114 marketers to find out who they consider to be successful, influential and a major contributor to marketing. The interviews took place over the internet and telephone between April 21 and June 24. Each interviewee cast three ranked votes.

Tesco is one company where having a background in marketing is a passport to the top. Many of its top executives, including chief executive Sir Terry Leahy, have had a spell in the marketing department, which is now headed by Tim Mason, winner of the Marketing Week poll to find who marketers rate most highly in the industry.

Educated at Stowe public school, Mason is described as smooth, suave and having an “amazing” aura of self-confidence. He joined Tesco in 1982 and was appointed to the board in 1995. His full title is director of marketing, e-commerce, property and the Republic of Ireland. Insiders say that Mason is given free rein over marketing without interference from Leahy, who lets his generals get on with the task at hand. But Mason is tipped as a possible successor to Leahy, though at 49 years old, the chief executive could stay in the top job for many years to come. Mason could get itchy feet during the wait – he has already been linked with the chief executive’s job at Boots. Another contender for the top slot is commercial and trading director Richard Brasher, who also comes from a marketing background.

But for the time being at least, there is little sign that Leahy is leaving. Having joined the retailer as a marketing executive in 1979, Leahy worked his way up through the ranks of the retailer to become chief executive in 1997. He is credited with driving Tesco to its current position as one of the world’s top three retail groups along with Wal-Mart and Carrefour.

He is a strong backer of the “every little helps” line created by ad agency Lowe, introduced in 1992 when he was marketing director, and believes it sums up the way Tesco has to meet customers’ needs at every turn. He says Tesco should have a “sense of natural paranoia” that its number one position is constantly under threat so that it constantly strives to make things better.

Leahy is an Everton-supporting Liverpuddlian who revels in being “ordinary”.

Virgin Atlantic, which is 49 per cent owned by Singapore Airlines under the holding company Voyager Group, is the third-largest British airline with 4 million passengers annually, and has recently announced plans to extend its fleet by up to 30 new aircraft.

It’s a long way from the charismatic entrepreneur’s early days, when in 1969 he founded the Virgin Mail Order Company. Nowadays, his business interests stretch far and wide and his familiar bearded face is known the world over.Serial entrepreneur and self-confessed workaholic Stelios founded his first company, Stelmar Shipping, in 1992, but it was the launch of budget airline easyJet three years later that made the amiable Greek a household name. Today, easyGroup’s portfolio of brands ranges from easyInternetcafÃ© and easyPizza to the recently launched easyMobile and easyCruise.

Stelios – who returned to the board of easyJet, which is now a public company, last month – has so far failed to match the airline’s success with any of his subsequent ventures. But the easy brand remains strong and one of its biggest assets is, without a doubt, the eternal optimist himself.Sir Alan Sugar, chairman and chief executive, AmstradGrizzly, straight-talking Amstrad boss Sir Alan Sugar has barged his way back into the public consciousness this year by fronting the UK version of reality television show The Apprentice.

Believed to be worth £700m, Sir Alan (knighted in 2000) grew up in a Hackney council flat and left school at 16. He founded electronics company Amstrad in 1968 at the age of 21 and as the company prospered during the 1980s he was the epitome of the Thatcherite self-made man.

He found more fame, and controversy, as chairman of Tottenham Hotspur football club in the 1990s, but Sir Alan’s star appeared to be on the wane until he reappeared as Brentwood’s very own Donald Trump.

The question is whether Sir Alan’s own no-nonsense brand can help the fortunes of the brand he founded.

Stelios Haji-Ioannou, chairman, easyGroupGlenn joined the company in 1992 as director of new product development for Walkers and rose quickly through the ranks, becoming vice- president of marketing in 1994, then president of Walkers in 1998, before being made president of PepsiCo UK and Ireland in 2003.

He has been at the forefront of the company’s new focus on developing healthier products. Last year he appeared at the Commons Health Select Committee on food to give evidence on behalf of the company and, ultimately, the food industry. PepsiCo has launched two products aimed at the “healthier” market: Quaker Seasons, baked mini-crisp breads, and Potato Heads, a range of crisps for children with 70 per cent less saturated fat than normal crisps and with no colourings, flavourings or preservatives.Richard Reed marketing director, InnocentCambridge graduate Reed set up the UK’s most successful smoothie maker in 1999 with two university friends. Since then Innocent and its bohemian ethos has grown phenomenally – it now boasts a 40 per cent market share in the yogurt drinks market and a turnover of about £17m a year.

Innocent’s unique marketing approach, developed by Reed, has defined the brand. Last year the company donated ten per cent of its £750,000 profit to charity. It organises music festivals and has established a strong ethical identity that is more cuddly than corporate.

Innocent plans to boost sales to £50m a year by 2007 and is expanding into Europe. Reed’s challenge will be maintaining the intimate, friendly culture of the original company with the global force it is becoming.

retail entrepreneurBillionaire Green is known as much for his extravagant lifestyle as for his business acumen: flamboyant pop star-populated parties contrast sharply with the savvy style with which he has acquired a string of retail operations.

His first acquisition, Jean Jeanie in 1985 for which he paid £65,000, was sold five months later for £3m. Purchases such as Bhs in 2000 and Top Shop parent company Arcadia in 2002 have given him a larger share of the clothing market than competitors Marks &amp; Spencer and Next.

The privately educated Brit, who left school at 15 without qualifications, now owns the second largest private business empire in the country. Last year his Midas touch slipped slightly as he failed to snatch control of what would have been the jewel in his retail crown: M&S. Green attempted a £9bn takeover of the beleaguered high street chain, which survived three bids before he gave in. What’s next on Green’s shopping list?

There’s been a lot of talk about online interviewing, and we at TNS certainly believe it’s the way forward, but a mixed methodology, like the Web and telephone as we used here, is sometimes the best way to get a response from senior decision makers.

We know that different methodologies can deliver different results, but the “harder” the numbers (for example, how many children you have) the less impact the medium has on the response.

Like political polling, however, the interviewer can have an effect on response: some people who vote Tory in the booths are too embarrassed to admit it to a pollster. We will leave you to decide whether any of the nominations in this poll might have been positively or negatively affected in a similar way.

Ones to watch? These two figured prominently in the results.

Gordon has overseen the Thomson Directories brand marketing strategy since late 1999 and is the man behind the recent Miles Calcraft Briginshaw Duffy ads, which reincarnate Thomson’s blue cat icon as a lycra-clad catwoman.

Since taking the helm, Gordon has faced several challenges to Thomson’s locally focused brand in the £700m UK directories market. The opening up of the directory enquiries market has led to the launch of several new services, such as a classified section in BT’s phonebook. The market has also had to respond to the increased role of the internet, and Gordon helped develop ThomWeb.co.uk, the directory’s online presence.

Gordon began his career as a trainee marketer with publisher Mills &amp; Boon, a period he describes as “romantic”, joining Thomson as a marketing manager in 1989.

The Budget group, which includes car rental services, was formed in 1992. It now has more than 1 million customers and is the UK’s third largest personal insurance intermediary. It deals with niche insurance products such as motor home and taxi insurance as well as breakdown cover, travel insurance and life insurance.