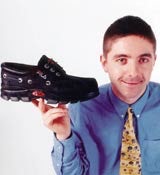 Sportswear brand Fila is without a top marketer after Dominic Munnelly quit the company.

Munnelly’s departure comes just weeks before parent company Fila Holdings is due to agree terms to sell its business to Sport Brands International, part of private US investment fund management company Cerberus – known in the US for turning around ailing businesses.

The company is making a number of staff redundancies and moving its head office from Newcastle to Manchester. It has also pulled out of its branded store in London’s Covent Garden.

Fila declined to comment on whether these moves were part of a downsizing of its UK operations.

The deal with Sport Brands International, announced earlier this month, is expected to be completed in June. Fila has suffered poor sales in recent years and its recent economic performance and debt levels have been reflected in the deal’s $351m (£224m) price tag.

Fila has been working to regain the credibility it enjoyed during the Seventies and Eighties.

It has focused on distributing products through midto top-end sports fashion retailers, supporting them with below-the-line activity.

Fila has also developed a number of sponsorship deals such as the Ferrari Formula 1 team, the top ten women’s tennis players and the Scottish national football team, but has no plans for above-the-line activity until 2004. It is unclear whether these plans will change.