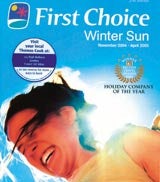 First Choice Holiday, the holiday company, is reviewing its £4m creative and media agency accounts following a restructure of its marketing department.

The review, which is in its early stages, will be overseen by new director of marketing services Steve Baily, who took over the role this week (MW June 9).

First Choice splits its advertising between Walsh Trott Chick Smith, which is the lead agency, and Phoenix, which was responsible for creating the animated characters from its I’m a Celebrity… Get Me Out of Here sponsorship idents (MW December 9, 2004). Media planning and buying for the company is handled by Walker Media.

The company says the review will be informal, but adds that nothing has been ruled out. A spokeswoman says: “We are having a look at where we are in terms of our agencies. Baily wants to get to grips with the situation and we are looking at both the creative and the media side.”

First Choice has consolidated the number of brands it operates in recent years. In 2003, it ditched many ofÂitsÂminorÂoperators, although it has kept a number of brands, including Sunsail and Hayes &amp; Jarvis, separate.