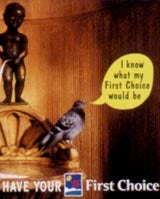 Island launches this week, backed by advertising created by RPM3. It represents a &£200m investment by the two rival companies.

Instead of the usual trimmings that are associated with cruises, such as dressing for dinner, dancing lessons, and set meal times, Island claims it will offer cruise passengers a more relaxed and informal atmosphere.

Costa Coffee, Oddbins and Holmes Place have signed up as partners to provide services onboard the ship.

The average age of passengers on a cruise ship is 54, but Island hopes that it will attract passengers in their 30s.

The company has already hired Karen Gee as marketing director. Gee joined in January from travel website eDreams where she had held the same position.

According to the latest figures from the Passenger Shipping Association, the cruise market has more than doubled over the past five years and serves about 777,000 passengers a year.

There has been a sharp reduction in growth of UK cruise passengers, from 12.5 per cent in 1999 to one per cent last year.

Burger King has chosen NescafÃ© as its preferred supplier of coffee in its UK restaurants, which could lead to cross-promotions between the brands.

Tesco’s successful skirmish with Levi’s demonstrates that a brand can’t afford to forsake its consumers just to embellish its status, says Alan Mitchell

Barclays has poached EMAP’s marketing director of consumer magazines, Simon Gulliford, to be its first group marketing director. Gulliford starts on May 14 and will be responsible for developing branding as well as creating an integrated marketing strategy for the group, which includes Barclaycard and Woolwich. Gulliford will report to chief administration officer Gary Dibb […]