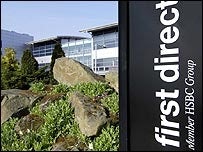 Firstdirect.com/live pulls in comments, good and bad, about the brand in real time from millions of social media sites, including Twitter. Visitors can see how many comments are positive, negative or mixed through graphs, while the most commonly used words are also displayed.

The bank says the site plays on its ‘Banking’s better in black and white’ slogan by honestly displaying what people think of it.

First Direct commissioned research prior to the campaign to understand the value consumers place on openness. They found 80% of those in the UK now use social networks at least once a month, which First Direct said is “heralding a new wave of openness”.

Lisa Wood, head of marketing, said, “The research showed that the banking sector doesn’t score well when it comes to openness and transparency. This is something we’re keen to change. This site is a move not many brands, let alone banks, would be able to do, but the research clearly showed that customers expect openness and honesty in the businesses they trust and recommend.”