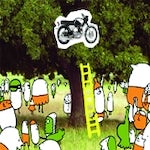 The series of 30 second and 10 second ads will be aired across the ITV and ITV digital network over the next five weeks.

The £300,000 campaign was developed in collaboration with (Beta) London.

The animated ad illustrates the website’s “ease of use” by using a Gumtree to visually represent a noticeboard; characters place items in the tree’s branches and then others climb the tree to claim what they want. The characters are all voiced by real Gumtree.com users that were recruited through an ad placed on the website.

Sam Taylor, head of brand and communications at Gumtree.com, says 2010 is shaping up to be a “strong year”.

“We have already run outdoor advertising in the spring to support the launch of the evolved site and this new national TV advertising campaign is the next step in raising awareness.”

An online local noticeboard, Gumtree.com connects 13.7 million people across the UK to buy, sell, find or swap anything from cars, jobs, property, goods and services within their local neighbourhoods.