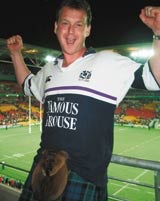 The Diary has always been rather scared of Scotsmen, with their giant shoes, curly wigs and red plastic noses. And it seems others regard them with suspicion, too – obviously they’ve been caught by the old squirty-flower trick before. Australian customs officers detained one Torquil Fitch, a PR man for The Famous Grouse, as he tried to enter their country for the Rugby World Cup.

The reason for their suspicion? They’d discovered a sporran in Fitch’s luggage and – understandably jumpy at the prospect of hordes of Scots descending on their country and making all the hire cars fall apart – thought it might pose a risk to the wildlife.

Eventually, Fitch persuaded them that his clothing was not going to spread disease among the koalas and he was allowed through.

With Australian officials also trying to ban bagpipers from the pitch, the Diary is moved to wonder what drives the Scots to cart all these strange items half way around the world.

Must be all those custard pies.