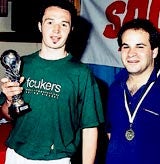 Armchair football fans were put to shame on FA Cup Final day as 300 marketers gathered at Wembley’s Goals sports centre to watch the match and play their own tournament.

Points for most enthusiastic team went to the Miniature Heroes from Cadbury Trebor Bassett, who turned up two hours before kick-off. Many pints later, the drunken confectioners were asked to leave by bar staff.

Finex, the winners of the tournament, were so sure of their success, their shirts were emblazoned with “Fcukers” (Finex Communications United Kickers).

Marketing Week, media partner for the event, also had a team, but the Diary was hard-pressed to find any embarrassing revelations about them.

The “awful” team award went to web design company ActiveIS, with a 100 per cent record of defeat.