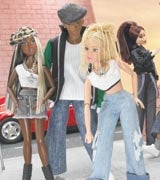 Mattel is increasing its challenge in the fashion dolls market with the UK launch of a range called Flavas in the autumn.

The set of four girls and two boys is the same number of dolls contained in the original range of Bratz dolls, which was launched by MGA Entertainment in an attempt to take on Mattel’s Barbie range.

Industry insiders see the Flavas dolls as being an overt challenge to Bratz, which is targeted at eightto 12-year-old girls. The first pictures of the range show the Flavas dolls mirroring Bratz’s street-wear and ethnic diversity.

The Flavas range has no connection with the Barbie brand, although it will be aimed at the same age group as the most recent Barbie launch – My Scene Barbie. One industry insider says: “I expect Flavas to be in direct competition with Bratz and to also go head-to-head with My Scene Barbie.” Mattel refused to comment.

MGA is set to give a bigger UK marketing push behind Bratz through a new venture with Vivid Imaginations from next year (MW last week).

MGA Entertainment has struck a number of licensing deals for the Bratz range. Penguin will launch a range of Bratz books in September and Hasbro will launch Bratz jigsaws and games.