Brands are traditionally built on the solid foundations of their core values, such as the use of innovative technology or a high standard of design and production. Then the countdown to the World Cup – and then the tournament itself – begins, and suddenly brand messages are built on the temporary values of being ’passionate about football’ and hoping ’our boys’ do well.

Flippant tactical switching employed by brands jumping on the World Cup bandwagon is the marketing equivalent of MPs ’flipping’ their second homes. It might boost profit in the short term, but it can be harmful to brands’ long-term reputations because it dilutes their brand messaging.

Campaigns that look to leverage the World Cup in their marketing can be very effective, if they produce something that resonates with their target audience without any spurious references.

The problem is that so many brands embrace football and the World Cup that it destroys that all-important point of difference. Brands are simply spending money on football-related tie-ins to be like every other brand, and nobody believes it. They are taking a flying punt on there being a return on investment. Consequently there is a lot of money wasted on something that can make the public very cynical.

If there’s nothing in your brand story that will make sense to the consumer about why you are supporting the England World Cup effort or leveraging the World Cup, then one wonders about the value you get out of that and what people believe about your brand – which is the thing that sustains sales in-between ad campaigns.

The result is the gradual erosion of the relationship of trust consumers have with advertising and media. If people don’t believe your sentiment about the World Cup, how are they going to believe your claims about your product?
It’s much like so many large companies in the UK, whose brands all embrace being eco-friendly or ’green’. It’s become a non-differentiator. They’re just spending money on it to be like everybody else and nobody believes it.

The World Cup is an opportunity for contact, yes. But it can be made into a pretty poor one if brands don’t think it through. Brands should make sure there is rhyme and reason to their messages, regardless of the football. Otherwise it’s just lazy thinking in the face of a vastly more complicated landscape in which brands have to choose how to spend their money.

Many brands will say that they’ve done their research and that their World Cup promotions perfectly complement their brand values, but everyone is capable of bending the truth. It’s the same as questioning shoppers on whether they buy white bread or brown bread. Most people will say they buy brown, when the majority of bread sold in the UK is actually white.

Ads and promotions that don’t embrace the World Cup theme in their messaging and instead focus on their core values will stand apart when everyone else is toeing the football promo line. It will also help them sustain their long-term credibility.

Long-term credibility is the goal – something MPs who chose not to ’flip’ their homes know a thing or two about.

BP has revealed that the cost to date for the Gulf of Mexico oil spill has reached $2bn (£1.34bn).

Metro Bank will mark the launch of its first branch in London by running a series of experiential events in a bid to create a local “community” bank. 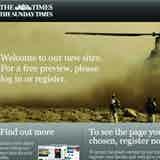 The Times has seen its market share halve since introducing required registration for its online content, according to a study.