Don’t fall out of your easy chair, but voter turn-out could actually increase at the coming General Election. Almost 1 million more of the UK’s 44 million registered voters might take the short stroll down to their local polling station to cast their ballot than in 2001, and there could be a further boost from postal voting, according to research by NOP.

But the UK is still in the grip of a political crisis as the ballot box loses its attraction for the population, particularly the young. As the campaign moves into its crucial final fortnight, it is becoming increasingly clear that old-style politics no longer appeals to many. It is being left to marketing and advertising strategists to inject some excitement into the proceedings, and create a battle of values, emotions and identity that will persuade the populace to get out and vote. If participation increases, says one advertising executive, it will be “the marketers wot won it”.

After the record-breakingly low 59.4 per cent turn-out at the 2001 General Election – the lowest anywhere in Europe since 1945 – there has been a glut of doom-laden predictions about the fate of politics in the UK should voter turn-out continue to decline. Politicians would lose their mandate and government would become a charade, observers warn.

So NOP’s poll, conducted last weekend, provides a crumb of comfort. It showed that 59 per cent of respondents rated the likelihood that they would vote at ten (out of ten) while five per cent said nine and another five per cent eight. According to NOP director of political research Nick Moon, this indicates that the percentage of voters turning out on May 5 could be in the low sixties. “It is relatively early, but it looks like it will be slightly higher than in 2001. Had the Tories not come back into the picture, there would be a lower turn-out. The fact the election has got more interesting suggests there may be a bit of a boost to turn-out,” he says.

The Conservative Party campaign, with its advertising through M&C Saatchi subsidiary Immediate Sales, has been credited with injecting values into the otherwise bland proceedings. The “Are you thinking what we’re thinking?” line is seen as a brilliant way of communicating to core supporters that the party is on their wavelength, without making explicit what the Conservatives are actually thinking. It touches on matters core voters may feel uncomfortable speaking about for reasons of political correctness, hinting at deep-rooted issues such as race with its swipes at immigration. The line acknowledges that voters can’t say out loud that they dislike foreigners and gypsies, but the Conservatives give them permission to think it. The hand-written scrawl, with phrases such as “It’s not racist to impose limits on immigration” is seen as a clever device for humanising the message, reminiscent of a postcard in an era of e-mails. The handwriting has the paternalistic feel of an old-fashioned school teacher’s end-of-term report.

The approach was masterminded by Lynton Crosby, a former Australian Liberal Party strategist credited with using populist, anti-asylum messages to ensure victory for the party under its unappealing leader John Howard. Crosby’s strategy focuses on “dog whistle” politics, a technique of appealing to the values of potential target voters on subjects not prioritised by the mass electorate.

Labour’s campaign, on the other hand, is widely viewed as a mess. Even the party’s strongest supporters acknowledge that the Conservatives are ahead on the marketing front. Greg Delaney, chairman of Delaney Lund Knox Warrren &amp; Partners and a keen Labour supporter, says: “Everyone in the advertising world is saying that the Tories have won the campaign, because they have messages that are consistently stated in a framework that gives simple prods to people’s anxieties.” Delaney adds, however, that Labour’s latest posters are a vast improvement.

Labour has gone for a variety of approaches, from the “flying pigs” execution, which fuelled outbursts about anti-Jewish stereotyping, to the black- and yellow-rimmed “warning” posters making the unjustified claim the Conservatives would “cut” &£35bn of spending, and the flower-power posters claiming the UK is in its best economic situation since the Sixties. This disconnected approach appears to reflect the power struggle within the party as fears grow inside New Labour that Tony Blair will be a lame duck if re-elected, just waiting to hand over the leadership to Gordon Brown. Charles Vallance, a partner at Vallance Carruthers Coleman Priest, who has worked for the Conservative Party, says: “It is a long time since the Conservative brand has had better marketing than the Labour brand.”

Andrew McGuinness, chief executive of Labour’s ad agency, TBWA/London, says the unifying theme of the campaign is “Labour – forward, not back” which has been single-mindedly hammered home through a variety of ads. “It crystallises the economic argument and there is a lot of quantitative evidence about who is winning the campaign. If you were a client looking at the immediate sales, the weekend’s reading would indicate that it has been successful, while there has been a flat line for the Tories since the campaign began.”

Even though the Conservative approach seems to be getting through to the party’score supporters – and producing an equal reaction from liberal opponents who are coming back to Labour – a low-sixties turn-out would still be a blow to politicians. Any turn-out much below two-thirds suggests a malaise within the system.

To address the crisis, the Electoral Commission (EC) was set up in 2000 to try to woo the voters back. But the EC’s hope that postal voting would boost turn-out, as it did in a number of test seats, has been sullied by the Birmingham postal vote-rigging scandal.

The EC claims that its tactics are having an astonishing effect and repoliticising the nation. It is launching a new phase in its “Tom and Mike” television advertising campaign, created by St Luke’s. This features an apolitical cartoon character who says he “doesn’t do politics”, only to be continually reminded by his friend that most of the complaints he has – from high prices to the UK’s poor performance at sport – are in fact political. “If you don’t do politics, there is not much you do do,” runs the strapline. The EC has also launched a “do politics” roadshow to stimulate interest in voting.

Back to the ballots

The EC claims that when it ran the television campaign around the 2004 European elections, it helped increase turn-out to 39 per cent from just 24 per cent at the previous Euro elections in 1999. However, turn-out last year was probably increased by local and London-mayoral elections on the same day, and the increased profile of the UK Independence Party also injected a little more interest than usual.

EC campaigns manager Becky Lloyd claims research showed that 64 per cent of the population were aware of the 2004 campaign and she claims that an impressive one in three people who saw the ad voted as a result of it, while one in four discussed politics after seeing the ads. “The positive results of the campaign showed we were encouraging people to be more interested in politics,” she says. But she denies that if participation falls, it will show that the campaign has failed.

MORI senior political analyst Roger Mortimore agrees that the EC’s 2004 campaign made a significant difference to voter turn-out. He believes the campaign could boost turn-out in this election too. “In the past few weeks, things have begun to pick up a bit: it looks like it won’t be as bad as before,” he says.

Direct marketing is also playing an important part in the election, with the parties sending personalised messages to floating voters. But there is some scepticism as to whether this can work, given that commercial direct marketing campaigns rarely achieve a response rate much above two per cent. There are also worries that such messages might be seen as intrusive and turn voters off.

Even so, the mere fact that persuading the public to vote may ultimately depend on the effectiveness of advertising and marketing campaigns, rather than hard policy, suggests that politics isn’t working. Marketing, as ever, remains in rude health.

Your vote counts, but for what? By George Pitcher

This General Election highlights the strange nature of political marketing. Definitions of marketing usually mention that its purpose is to satisfy or to create a demand for an enterprise’s products or services. But, in politics, the aim is to satisfy demand only so far as securing a greater market share – no matter how small the market – than the competition. 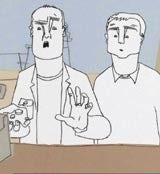 Perversely – and unlike any other area of professional marketing – this can mean that the parties have a vested interest in the overall market shrinking. This is the case now with Michael Howard’s Tories. Low turn-out is the enemy of Labour. For all the talk of wanting to fight a positive campaign on issues that are close to the hearts of the British people, the Conservatives’ fortunes are directly connected with alienating much of the electorate from the political process. The Republican Party in the US long ago recognised the electoral value of making voters stay at home.

So the Tories are making mating calls to those who might vote for them, but not trying to create new voters. This odd sort of marketing throws up further paradoxes. The Tories were running the line ‘Vote Blair, Get Brown’, until they realised that many Labour voters, deeply disillusioned with Tony Blair, thought that this was rather an attractive proposition. Then the weird arithmetic of the British electoral system threw up an even stranger conundrum – a substantial swing to the Tories is only likely to reduce, not overturn, the Labour majority, meaning Blair’s prompt departure after the election. As one Tory insider ruefully put it to me: ‘It’s more like: Vote Tory, Get Brown.’

If that’s the Tories’ marketing problem, Labour’s difficulty is one of distribution. So reviled is Blair now among many Labour supporters that the party cannot find campaigning staff at local level. In some areas, the only people who will distribute leaflets are Labour councillors. It’s as if local newsagents suddenly refused to stock The Guardian and The Daily Mirror and those newspapers had to make their own deliveries.

So low turn-out isn’t necessarily a failure of politics – it may serve the Conservatives’ purpose – and, paradoxically, apathy among Labour supporters may deliver precisely what many of them now want: Gordon Brown as prime minister. It’s a bit like an increase in a competitor’s market share forcing a new product launch by the market leader. Except, in New Labour’s case, it would be an older product. Welcome to the weird world of political marketing.