British business is being used as a political tool in the general election battle. The Conservative manifesto promises to weed out those brands making false claims to be British, while the Labour Party promises to make it harder for foreign companies to complete hostile takeovers of British businesses.

These policies address valid concerns among the British public, according to new research from agency Leapfrog. The study shows three-quarters of Britons think about a brand’s nationality when they go shopping.

Just over a quarter of people (26%) say they actively support British business because they want to keep money in the country. And 23% worry that if a brand is sold to a foreign company, it will lose its British identity. Understanding a product’s provenance is also a reason for 22% of people to buy British.

Older generations are worried about keeping jobs in the country and have a much stronger sense of British culture than younger consumers, says Leapfrog director Sarah Buckle. “They are more likely to think that they are doing their bit for their country by buying British,” she says.

The 55-plus age group are more concerned with supporting the country’s economy, with 32% saying they want to boost local jobs, compared with 29% of 16- to 34-year-olds.

When people are out shopping, they like to see British brands on supermarket shelves, says Buckle. “There’s a nostalgia element to these associations – people have grown up with these brands,” she explains.

The research suggests Premier Foods-owned brands such as Hovis, Bisto and Oxo are synonymous with Britain. The UK-owned brands have been known to shoppers for several generations and the fact that they are still based in this country makes them appealing to consumers who want to actively buy British brands.

Food and drinks brands are most likely to risk reputational damage if they sell up to foreign owners, warns the survey. Indeed, 31% think it would negatively affect a food and drinks business if it was no longer a British company.

Automotive and financial services brands also risk reputational damage if they fall into the hands of foreign owners, with 15% believing a motor company’s reputation would be damaged if it was sold to an overseas firm. And 13% believe the same when it comes to financial services companies.

However, there is confusion about which brands are British and which are foreign-owned. Many brands that have overseas owners are believed to be British, according to the survey. Thirty-eight per cent believe that Hamley’s, which is part-owned by an Iceland bank, is wholly British owned. Buckle says that’s no surprise as the toy store is “synonymous with London”.

Land Rover, which is owned by Indian company Tata Group, is also believed to be a British brand by 39% of respondents. Brands like Land Rover, which is known by several generations, have built up an association with Britain over time. The fact that an overseas company now owns it doesn’t appear to have been noticed by a large segment of the population.

Buckle suggests that even if businesses are foreign-owned, if they have British values they can use those to endear themselves to the UK public. “It’s key for marketers to understand the emotional response to Britishness. Making sure that resonates with consumers is really important,” she argues.

It isn’t just ownership that interests people. The study suggests consumers also respond well to marketing which reflects British culture, with 12% considering a company to be British if its advertising reflects the country’s heritage.

Different demographics and genders have varying priorities. Women are more concerned than men about British values, while men and those aged 55 and over are concerned about what will happen to jobs if a company falls into foreign hands. And young people are less concerned with Britishness, but do consider “business ethics” to be important, says Buckle.

She adds that globalisation has resulted in a younger generation becoming used to exposure from foreign brands and this group doesn’t worry as much about corporate origins. They are more interested in how a business is run.

After all, consumers may aspire to buy products from British companies but the reality is that shopping baskets are filled with brands from a mixture of origins. No matter what the pull to home-owned brands, the cost of the items is still an issue, says Buckle.

And there are even those that simply don’t care about provenance at all. A quarter of respondents say they don’t ever worry about whether products are British or not. And a few people say they actively buy foreign products because they think they are more exotic. Brands from overseas are more interesting, agree 4% of 16- to 34-year-olds. This compares to less than 1% of the 55-plus age group.

This research indicates that politicians may be right to focus on Britishness in the build-up to the election because consumers still buy brands such as Hovis and Bisto because of their British origins. And communicating such values will remain an important part of many brands’ identities. UK airline BMI recently decided to use its old moniker British Midland International abroad as this resonates better with customers than an acronym.

So while brands should try to remain as authentic as possible in their marketing, foreign-owned companies with UK heritage should not hesitate to use their roots. Although many people claim to be uneasy about Kraft’s takeover of Cadbury, if its British values are communicated carefully, much of the British public won’t even notice.

We switched to 100% British wheat earlier this year and the fact that provenance was important to consumers was a driving force in this decision. We are a 123-year-old brand and are in a unique position to have this British history. Over the years we have been involved in many patriotic gestures – we donated a Spitfire in the Second World War, for example. This has allowed the brand to develop as a British icon.

Provenance is a huge part of what people are interested in when it comes to food. If they know a brand is British then people associate it with quality and taste. Another benefit people associate with British products is an environmental one. British farming used to have a bad reputation but today it’s a positive image to have people working in the rural area.

We don’t see a difference in opinion based on age group, but rather in interest. If you live in the countryside, it’s more likely that your interest lies with the rural community.

We’ve been communicating our switch to 100% British wheat since February, which has resulted in a sales uplift.

Our research shows that provenance is more important to the UK when the economic climate is tough. In the last 24 months there has been a 20% growth in interest in this area, with 59% saying that provenance is a really big issue for them.

But being British can’t be faked. It has to be in the DNA of the brand. It’s not so much about claiming to be British, which many brands do, more a case of allowing our brands to be themselves.

If we are true to the brands in our communications and product development then the iconic Britishness will come out. Bisto and Oxo have been part of the nation’s fabric for the best part of a century with the Bisto Kids and the Oxo Family still universally recognised. However, Oxo has updated its communications to remain relevant to the UK consumers. The Oxo partnership with The X Factor last year is an example of how to modernise the brand while remaining true to its British roots.

People find it hard to say what it is to be British. We wanted to associate with The Great Exhibition because the event celebrates the very best of British.

We’re based in Gloucestershire, although our business is floated on the German stock exchange. But most people consider us to be British because we’re based in this country. When it comes to technology, people feel more at ease if the data is stored in their home country, so from that perspective we benefit from our British association.

We know from previous marketing activity that when we ran a campaign celebrating the business’s tenth anniversary and used a union flag, it resonated well with our audience. And it was a highly successful message because we made that association with being British. 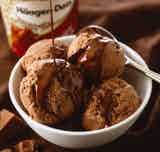 Nestlé, owner of the Nescafe, Kit Kat and Haagen Dazs brands, has pledged to increase investment in its brands after reporting a 6.5% increase in group sales for the first quarter of the year.

Global companies are signalling a shift in strategy with a batch of reshuffles of senior marketing and chief executive roles.

Creative Review’s popular Annual, which rounds up the best work in advertising and visual culture from the preceding 12 months, is available for the first time as an iPhone App.