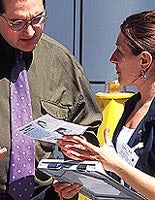 Media commentators have, over the past few years, given “focus groups” a generally negative reputation. Many in the market research industry feel that every time the press holds the concept up for ridicule, they are being made to suffer for an idea which is either out of date or was never theirs in the first place.

In fact, many UK market research companies recognise the term “focus group” as more applicable to the North American practice. UK specialists tend to prefer the term “consumer group discussion”, but try selling that to those filling the opinion pages and Sunday columns.

People first started talking about focus groups in a political context when the Blair entourage set out to learn the lessons of Clinton’s first election victory. But researchers with longer track records in the industry note that the association of the Blair government with discussion groups is misplaced. It was the Conservatives who first used research in this way; Labour was, in fact, a late arrival on the scene. And as an optional part of the decision-making process for business, groups of this sort have been about for decades.

Media concern over focus groups grew as they were seen to become increasingly influential on policy building. The fear is that any reforming initiative will be surrendered to the lowest common denominator of the group- the fear of “dumbing down”.

It has been the creative areas, such as TV programming, which have shown most resistance to the influence of group discussions. Stories about the “creativity” of successful new product development, which has had to overcome initial consumer scepticism, are not only often anecdotal, but say more about the way results were arrived at and interpreted than about the research vehicle itself. If the client debrief really did dumb everything down, that would not be the fault of the group, but the researchers.

“No good researcher lets the group be judge and jury,” explains BMRB senior associate director Christine Garland. “You should not abdicate responsibility to the group, but only use it as a sounding board. You learn from the group, and then use that information to make your decisions.

“For example, there have been ads that were so new and radical in their approach that they foxed people in research, but the client took the risk and went ahead anyway,” says Garland. “You have to evaluate the risks. But good advertising is often risky advertising.” Another point that is often missed, according to Garland, is that the group discussion is only one of several qualitative research techniques available, and is not a static form.

“The form is always evolving,” she says. “The group itself is just a starting point – it is what you do within it that is important. For some types of people and projects, it is the right kind of research instrument.”

But, as BMRB shows, there are other forms, such as single interviews, pairs (or couples, in house buying, for example) and location-based research – such as accompanied shopping – all of which may be more appropriate for given objectives.

Garland believes that those journalists who have been critical of group research either do not appreciate the importance of the interpretive element or else do not believe such interpretation can give anything approaching scientific validity to its conclusions.

Again, there may be a confusion with the way that groups tend to be run in the US, says Research International (RI) Qualitatif joint managing director May Tha-Hla. “The US style is often seen in general terms as being almost trite; not in-depth,” she says. “Rather than being analytical or interpretive, it is seen as being about getting answers to certain questions.”

The atmosphere in a given group, and the way respondents warm to the researcher, do not necessarily ensure a good result. “It all comes down to the way you analyse what comes out of it,” says Tha-Hla. “If you can’t do that, you’ve wasted a project.”

Because the role of interpretation is so critical, as in all qualitative research, the use of group discussions as a tool is seen as being more of an art than a science. But experienced researchers argue that this in no way undermines its value.

Tha-Hla is happy with current practice, which allows clients to see certain stages in the research, but excludes them from others.

There is no proof, she says, that either viewing or filming a group discussion or holding it in an artificial environment prompts more or less favourable responses. But she draws the line at allowing the client to sit in the same room as the group.

It is not only the media which has recently made a virtue out of rubbishing focus groups in particular, and qualitative research in general.

In a mid-March presentation to the Market Research Society (MRS), president of the IPA and chairman of HHCL &amp; Partners Rupert Howell quoted a fashionable view voiced by Anita Roddick. If her business is like driving a car, she is reported to have said, market research is like looking in the rear-view mirror. “It tells me where I’ve been, but not where I’m going.”

Howell distanced himself from this view, saying: “I believe great qualitative research is like putting the headlights on – it shows you where you can go.”

But he then hammered home a string of criticisms. “Researchers have got to be prepared to dismiss ‘likeability’ as the key measure,” he notes. “It’s got to be about strength of impact and how the work challenges the comfortable behaviour the consumer currently enjoys.” To this end, he proposes the exclusion of both ad agency and client from the process by abolishing the two-way mirror.

On the issue of interpretation, Howell is emphatic. Too many researchers see their job as being information gathering, rather than analysis, he argues. “They think subjectivity and objectivity are opposites, when you need elements of both to get the most out of a research project.”

The rear-view mirror perception of market research has persuaded some companies to make radical changes to the way projects are handled. Brand consultancy New Solutions has been so successful with this that it has even persuaded The Body Shop that research does, after all, have value.

New Solutions uses qualitative research as an extension of the NPD or brand development process, with consumers brought into workshops at an early stage, working backwards with them to re-examine initial premises where necessary. The client might also be involved at this stage. “It’s not about objectivity or evaluation – it’s about having the consumer as a co-creator in the process,” says research consultant Amanda Bradbury.

The consultancy uses a number of different research tools grouped together under the name Futuresearch. These include conflict groups, which reverse the normal consensual basis of group discussions, and foreign consumer projects, which allow brands to bring outside perspectives into research. Applying these techniques to a retail environment, says Bradbury, could include sessions in a viewing facility, as well as accompanied shops and in-store group discussions.

New Solutions believes that direct interaction between client and consumer can be a positive part of the process. And by no means all research companies believe that keeping the client at arm’s length during a project is the best way of achieving reliable results. Experience in group discussions for local government organisations has led NOP research manager Neil Lovell to value the direct involvement of the client.

“As time goes by, I’m coming round to the view that, rather than acting as a hindrance, it can actually help the group,” says Lovell. “It allows respondents to put a face to the organisation which has commissioned the research, and to have their own questions answered.”

This approach can be usefully extended to advertising and NPD research, Lovell believes, and should be seen as part of the trend towards treating the consumer as a stakeholder in the brand. “When the client is in the room, you will always have the risk of respondents starting to posture or play to the gallery, but managing that is part of your job as a researcher,” he says.

Nor does Lovell have any truck with the idea of introducing the client as “a colleague”. As he explains, the Market Research Society (MRS) has come out against this sort of deception. “I am very keen on respondent rights,” says Lovell. “If we’re expecting them to be honest, we should be honest in return.”

Good qualitative research makes the consumer feel part of the process of shaping a product or service – one half of an exchange, rather than the subject of a laboratory experiment. But respondents are also likely to be more relaxed, and provide more insights, if the discussion group is not overloaded with secondary lines of enquiry from the client. Researchers will end up with in-depth responses to a limited range of stimuli, rather than wider ranging, but superficial data. That, after all, is what “focus” is all about.

Casting aside the old adage, “never work with children or animals” Banks Hoggins O’Shea/FCB has opted to use the ultimate experienced traveller for their ads for Travelstore.com – a live goose. Despite enlisting the services of the only trainable breed of the bird – an African goose – others have been less willing to throw […]

EasyEverything, the Internet caféset up by EasyJet owner Stelios Haji-Ioannou, is seeking a marketing director to pilot its expansion into Europe.